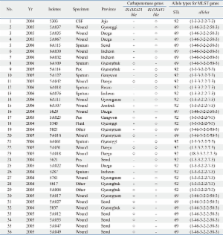 Thirty six non-duplicated carbapenem-resistant A. baumannii isolates were collected from 17 non-tertiary hospitals in Korea between 2004 and 2006. Isolates were typed by multilocus sequence typing and repetitive-sequence-based PCR (rep-PCR). Detection of genes encoding OXA carbapenemase and their relationship with ISA ba1 was performed by PCR.

Two clones were prevalent among 36 isolates: ST69 (17 isolates, 47.2%) and ST92 (19 isolates, 52.8%). Rep-PCR patterns were diverse and revealed that all isolates were clustered into eight band patterns. The ISA ba1-activated blaOXA-23-like and ISA ba1-activated blaOXA-51-like genes were prevalent among the carbapenem-resistant A. baumannii isolates.

The class D β-lactamase genes of A. baumannii were distributed nationwide in non-tertiary Korean hospitals.

E Feil,  B. C. Li,  D M Aanensen … (2004)
The introduction of multilocus sequence typing (MLST) for the precise characterization of isolates of bacterial pathogens has had a marked impact on both routine epidemiological surveillance and microbial population biology. In both fields, a key prerequisite for exploiting this resource is the ability to discern the relatedness and patterns of evolutionary descent among isolates with similar genotypes. Traditional clustering techniques, such as dendrograms, provide a very poor representation of recent evolutionary events, as they attempt to reconstruct relationships in the absence of a realistic model of the way in which bacterial clones emerge and diversify to form clonal complexes. An increasingly popular approach, called BURST, has been used as an alternative, but present implementations are unable to cope with very large data sets and offer crude graphical outputs. Here we present a new implementation of this algorithm, eBURST, which divides an MLST data set of any size into groups of related isolates and clonal complexes, predicts the founding (ancestral) genotype of each clonal complex, and computes the bootstrap support for the assignment. The most parsimonious patterns of descent of all isolates in each clonal complex from the predicted founder(s) are then displayed. The advantages of eBURST for exploring patterns of evolutionary descent are demonstrated with a number of examples, including the simple Spain(23F)-1 clonal complex of Streptococcus pneumoniae, "population snapshots" of the entire S. pneumoniae and Staphylococcus aureus MLST databases, and the more complicated clonal complexes observed for Campylobacter jejuni and Neisseria meningitidis.

Ailie Turton,  Matthew Ellington,  Clarimar Coelho … (2006)
Carbapenem resistance in Acinetobacter baumannii is a growing public health concern and is most often mediated by OXA carbapenemases. We describe a novel multiplex polymerase chain reaction (PCR) assay able to detect and distinguish alleles encoding three subgroups of acquired OXA carbapenemases (OXA-23-like, OXA-24-like and OXA-58-like) that are scattered in Acinetobacter spp., and a fourth subgroup, OXA-51-like, which appears to be intrinsic to Acinetobacter baumannii. Isolates belonging to two prevalent UK A. baumannii 'OXA' clones (OXA-23 clones 1 and 2) had alleles encoding both an intrinsic OXA-51-like and an acquired OXA-23 enzyme, whereas isolates of the 'SE clone' had only an intrinsic bla(OXA-51-like) allele. Genes encoding OXA-58 were detected (with bla(OXA-51-like)) in a cluster of related isolates from a single hospital. This simple assay will assist in monitoring the mechanisms responsible for carbapenem resistance in Acinetobacter spp.