PRL-3和RhoC在A549细胞中的表达及意义 Translated title: Expressions and Signifcances of PRL-3 and RhoC in A549 Cell 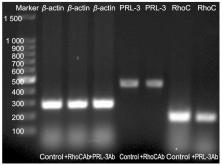 The expression of phosphatase of regenerating liver-3 (PRL-3) is cor- related with Ras homologue C (RhoC) in non-small cell lung cancer (NSCLC), suggesting that they have interactions. The aim of this study is to investigate the functions of PRL-3 and RhoC in the migration of A549 cell and the potential mechanism of PRL-3 and RhoC in carcinogenesis and cancer development.

PRL-3, RhoC could increase cell migration in A549 cells.

Genomic analysis of metastasis reveals an essential role for RhoC.

E Lander,  Elizabeth T. Golub,  Thomas Hynes … (2000)
The most damaging change during cancer progression is the switch from a locally growing tumour to a metastatic killer. This switch is believed to involve numerous alterations that allow tumour cells to complete the complex series of events needed for metastasis. Relatively few genes have been implicated in these events. Here we use an in vivo selection scheme to select highly metastatic melanoma cells. By analysing these cells on DNA arrays, we define a pattern of gene expression that correlates with progression to a metastatic phenotype. In particular, we show enhanced expression of several genes involved in extracellular matrix assembly and of a second set of genes that regulate, either directly or indirectly, the actin-based cytoskeleton. One of these, the small GTPase RhoC, enhances metastasis when overexpressed, whereas a dominant-negative Rho inhibits metastasis. Analysis of the phenotype of cells expressing dominant-negative Rho or RhoC indicates that RhoC is important in tumour cell invasion. The genomic approach allows us to identify families of genes involved in a process, not just single genes, and can indicate which molecular and cellular events might be important in complex biological processes such as metastasis.

A phosphatase associated with metastasis of colorectal cancer.

Christoph Lengauer,  Sarah Romans,  B Vogelstein … (2001)
To gain insights into the molecular basis for metastasis, we compared the global gene expression profile of metastatic colorectal cancer with that of primary cancers, benign colorectal tumors, and normal colorectal epithelium. Among the genes identified, the PRL-3 protein tyrosine phosphatase gene was of particular interest. It was expressed at high levels in each of 18 cancer metastases studied but at lower levels in nonmetastatic tumors and normal colorectal epithelium. In 3 of 12 metastases examined, multiple copies of the PRL-3 gene were found within a small amplicon located at chromosome 8q24.3. These data suggest that the PRL-3 gene is important for colorectal cancer metastasis and provide a new therapeutic target for these intractable lesions.

Up-regulation of small GTPases, RhoA and RhoC, is associated with tumor progression in ovarian carcinoma.

Satoshi Ohira,  Y. Feng,  Ikuo Konishi … (2003)
To clarify the role of small GTPases Rho in the biologic behavior of ovarian carcinoma, we first examined the mRNA expression of RhoA, RhoB, and RhoC in benign, borderline, and malignant ovarian tumors using RT-PCR and real-time RT-PCR. The expression and localization of RhoA protein were also analyzed by Western blotting and immunohistochemistry. Finally, we examined whether up-regulation of Rho enhances the invasiveness of ovarian cancer cells in vitro. Analysis of mRNA levels of the Rho family genes revealed that levels of both RhoA and RhoC were significantly higher in carcinomas than in benign tumors (RhoA, p = 0.0035; RhoC, p = 0.0006). According to histologic subtype, both RhoA and RhoC mRNA levels in serous carcinomas were significantly higher than those in other histologic types. With regard to the International Federation of Gynecological and Obstetrics stage classification, both of RhoA and RhoC mRNA levels were significantly higher in tumors of Stages III+IV than in those of Stages I+II (RhoA, p = 0.0200; RhoC, p = 0.0057). In addition, analysis of matched pairs of primary and disseminated lesions demonstrated that expression of both RhoA and RhoC mRNA was significantly higher in metastatic than in primary tumors. Examination of the protein level showed that expression of RhoA was also increased in advanced ovarian carcinomas, especially those of serous histology. Accordingly, we hypothesized that up-regulation of Rho GTPases plays an important role in the progression of ovarian carcinoma. Matrigel invasion assay using the ovarian cancer cell line, SKOV3, showed that up-regulation and activation after treatment with lysophosphatidic acid was associated with enhanced invasion of the cancer cells. This increase in invasiveness was suppressed by the addition of C3, a specific inhibitor of Rho. These findings suggest that up-regulation of Rho GTPases is important in the tumor progression of ovarian carcinoma and that Rho family proteins could be a molecular target in cancer therapy.

This is an open access article distributed in accordance with the terms of the Creative Commons Attribution (CC BY 3.0) License. See: https://creativecommons.org/licenses/by/3.0/