The role of propranolol as a radiosensitizer in gastric cancer treatment 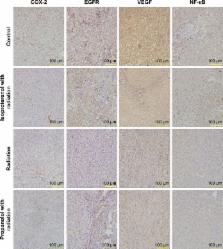 The National Comprehensive Cancer Network guidelines indicate that radiotherapy in gastric cancer shows limited effectiveness at reducing the growth of gastric cancer. Therefore, enhancing the sensitivity and effect of radiotherapy with propranolol, a β-adrenoceptor antagonist, could reduce tumor growth. The role of propranolol as a radiosensitizer has not been adequately studied; therefore, the purpose of the present study is to evaluate the effect of propranolol as a radiosensitizer against gastric cancer in vivo.

The growth in the volume and weight of the tumor was lower in mouse models treated with propranolol and radiation therapy compared to the other groups. Decreased expression of NF-κB was also observed in treatment groups where both propranolol and radiation were used, leading to the reduction of COX-2, EGFR, and VEGF expression compared to that in the other groups.

The present study indicated that propranolol potentiates the antitumor effects of radiotherapy in gastric cancer by inhibiting NF-κB expression and its downstream genes: VEGF, EGFR, and COX-2.

Global estimates of cancer prevalence for 27 sites in the adult population in 2008.

Freddie Bray,  Jian-Song Ren,  Eric Masuyer … (2013)
Recent estimates of global cancer incidence and survival were used to update previous figures of limited duration prevalence to the year 2008. The number of patients with cancer diagnosed between 2004 and 2008 who were still alive at the end of 2008 in the adult population is described by world region, country and the human development index. The 5-year global cancer prevalence is estimated to be 28.8 million in 2008. Close to half of the prevalence burden is in areas of very high human development that comprise only one-sixth of the world's population. Breast cancer continues to be the most prevalent cancer in the vast majority of countries globally; cervix cancer is the most prevalent cancer in much of Sub-Saharan Africa and Southern Asia and prostate cancer dominates in North America, Oceania and Northern and Western Europe. Stomach cancer is the most prevalent cancer in Eastern Asia (including China); oral cancer ranks as the most prevalent cancer in Indian men and Kaposi sarcoma has the highest 5-year prevalence among men in 11 countries in Sub-Saharan Africa. The methods used to estimate point prevalence appears to give reasonable results at the global level. The figures highlight the need for long-term care targeted at managing patients with certain very frequently diagnosed cancer forms. To be of greater relevance to cancer planning, the estimation of other time-based measures of global prevalence is warranted. Copyright © 2012 UICC.

The proteasome: structure, function, and role in the cell.

J. Adams (2003)
The proteasome is a multisubunit enzyme complex that plays a central role in the regulation of proteins that control cell-cycle progression and apoptosis, and has therefore become an important target for anticancer therapy. Before a protein is degraded, it is first flagged for destruction by the ubiquitin conjugation system, which ultimately results in the attachment of a polyubiquitin chain on the target protein. The proteasome's 19S regulatory cap binds the polyubiquitin chain, denatures the protein, and feeds the protein into the proteasome's proteolytic core. The proteolytic core is composed of 2 inner beta rings and 2 outer alpha rings. The 2 beta rings each contain 3 proteolytic sites named for their trypsin-like, post-glutamyl peptide hydrolase-like (PGPH) (i.e., caspase-like), or chymotrypsin-like activity. Inhibition of the proteasome results in cell-cycle arrest and apoptosis. In in vitro and in vivo animal studies, inhibition of the proteasome via bortezomib (VELCADE; formerly, PS-341, LDP-341, and MLN341) had antitumor activity against numerous tumor types either alone or in combination with conventional chemotherapeutic agents; these results provided the rationale for a broad clinical trial program. Bortezomib is currently in phase III trials for myeloma and is in early clinical development for numerous other tumor types.

Roles of VEGF-A signalling in development, regeneration, and tumours.

Ken-ichi Matsumoto,  Masatsugu Ema (2014)
Angiogenesis, the formation of new networks of blood vessels, has essential roles in embryonic development, organ homeostasis and disease progression. Several signalling molecules, such as vascular endothelial growth factors (VEGFs), fibroblast growth factors (FGFs), transforming growth factor (TGF)-β and angiopoietin-1 and 2, are known to be key regulators of blood vessel development and network patterning. Among these, the roles of VEGF-A and its receptors in vessel morphogenesis are understood best. VEGF-A signalling plays a crucial role in embryonic development through the regulation of angiogenesis. VEGF-A regulates most of the endothelial response, such as the proliferation and migration of endothelial cells (ECs), vascular permeability and the selection of tip and stalk cells. VEGF-A signalling also regulates organ homeostasis in adults. If an organ is exposed to severe injury, VEGF-A induces the release of paracrine factors from ECs, which increase the rate of regeneration of the organ. VEGF-A signalling also has an important role in the progression of angiogenesis-related diseases, especially cancer. Consequently, many agents that block VEGF-A have been developed and reported as useful tools for the inhibition of the growth and metastatic spread of tumours. Here, we summarize recent reports of the multiple functions of VEGF-A signalling during development, organ regeneration and tumour progression.