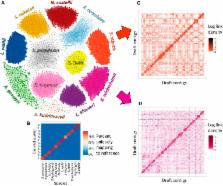 Microbial communities consist of mixed populations of organisms, including unknown species in unknown abundances. These communities are often studied through metagenomic shotgun sequencing, but standard library construction methods remove long-range contiguity information; thus, shotgun sequencing and de novo assembly of a metagenome typically yield a collection of contigs that cannot readily be grouped by species. Methods for generating chromatin-level contact probability maps, e.g., as generated by the Hi-C method, provide a signal of contiguity that is completely intracellular and contains both intrachromosomal and interchromosomal information. Here, we demonstrate how this signal can be exploited to reconstruct the individual genomes of microbial species present within a mixed sample. We apply this approach to two synthetic metagenome samples, successfully clustering the genome content of fungal, bacterial, and archaeal species with more than 99% agreement with published reference genomes. We also show that the Hi-C signal can secondarily be used to create scaffolded genome assemblies of individual eukaryotic species present within the microbial community, with higher levels of contiguity than some of the species’ published reference genomes.

Michael Eisen,  P. T. Spellman,  P. O. Brown … (1999)
A system of cluster analysis for genome-wide expression data from DNA microarray hybridization is described that uses standard statistical algorithms to arrange genes according to similarity in pattern of gene expression. The output is displayed graphically, conveying the clustering and the underlying expression data simultaneously in a form intuitive for biologists. We have found in the budding yeast Saccharomyces cerevisiae that clustering gene expression data groups together efficiently genes of known similar function, and we find a similar tendency in human data. Thus patterns seen in genome-wide expression experiments can be interpreted as indications of the status of cellular processes. Also, coexpression of genes of known function with poorly characterized or novel genes may provide a simple means of gaining leads to the functions of many genes for which information is not available currently.

Eitan Yaffe,  Amos Tanay (2011)
Hi-C experiments measure the probability of physical proximity between pairs of chromosomal loci on a genomic scale. We report on several systematic biases that substantially affect the Hi-C experimental procedure, including the distance between restriction sites, the GC content of trimmed ligation junctions and sequence uniqueness. To address these biases, we introduce an integrated probabilistic background model and develop algorithms to estimate its parameters and renormalize Hi-C data. Analysis of corrected human lymphoblast contact maps provides genome-wide evidence for interchromosomal aggregation of active chromatin marks, including DNase-hypersensitive sites and transcriptionally active foci. We observe extensive long-range (up to 400 kb) cis interactions at active promoters and derive asymmetric contact profiles next to transcription start sites and CTCF binding sites. Clusters of interacting chromosomal domains suggest physical separation of centromere-proximal and centromere-distal regions. These results provide a computational basis for the inference of chromosomal architectures from Hi-C experiments.

Sequencing datasets generated by this study have been deposited in the NCBI Short Read Archive under the accession SRP041431.