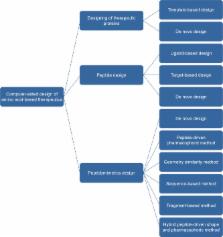 During the last two decades, the pharmaceutical industry has progressed from detecting small molecules to designing biologic-based therapeutics. Amino acid-based drugs are a group of biologic-based therapeutics that can effectively combat the diseases caused by drug resistance or molecular deficiency. Computational techniques play a key role to design and develop the amino acid-based therapeutics such as proteins, peptides and peptidomimetics. In this study, it was attempted to discuss the various elements for computational design of amino acid-based therapeutics. Protein design seeks to identify the properties of amino acid sequences that fold to predetermined structures with desirable structural and functional characteristics. Peptide drugs occupy a middle space between proteins and small molecules and it is hoped that they can target “undruggable” intracellular protein–protein interactions. Peptidomimetics, the compounds that mimic the biologic characteristics of peptides, present refined pharmacokinetic properties compared to the original peptides. Here, the elaborated techniques that are developed to characterize the amino acid sequences consistent with a specific structure and allow protein design are discussed. Moreover, the key principles and recent advances in currently introduced computational techniques for rational peptide design are spotlighted. The most advanced computational techniques developed to design novel peptidomimetics are also summarized.

Ron Dror,  Stefano Piana,  Kresten Lindorff-Larsen … (2011)
An outstanding challenge in the field of molecular biology has been to understand the process by which proteins fold into their characteristic three-dimensional structures. Here, we report the results of atomic-level molecular dynamics simulations, over periods ranging between 100 μs and 1 ms, that reveal a set of common principles underlying the folding of 12 structurally diverse proteins. In simulations conducted with a single physics-based energy function, the proteins, representing all three major structural classes, spontaneously and repeatedly fold to their experimentally determined native structures. Early in the folding process, the protein backbone adopts a nativelike topology while certain secondary structure elements and a small number of nonlocal contacts form. In most cases, folding follows a single dominant route in which elements of the native structure appear in an order highly correlated with their propensity to form in the unfolded state.

Nadja K. Simons,  C Kooperberg,  Norden Huang … (1997)
We explore the ability of a simple simulated annealing procedure to assemble native-like structures from fragments of unrelated protein structures with similar local sequences using Bayesian scoring functions. Environment and residue pair specific contributions to the scoring functions appear as the first two terms in a series expansion for the residue probability distributions in the protein database; the decoupling of the distance and environment dependencies of the distributions resolves the major problems with current database-derived scoring functions noted by Thomas and Dill. The simulated annealing procedure rapidly and frequently generates native-like structures for small helical proteins and better than random structures for small beta sheet containing proteins. Most of the simulated structures have native-like solvent accessibility and secondary structure patterns, and thus ensembles of these structures provide a particularly challenging set of decoys for evaluating scoring functions. We investigate the effects of multiple sequence information and different types of conformational constraints on the overall performance of the method, and the ability of a variety of recently developed scoring functions to recognize the native-like conformations in the ensembles of simulated structures.

Daniela Röthlisberger,  Olga Khersonsky,  Andrew Wollacott … (2008)
The design of new enzymes for reactions not catalysed by naturally occurring biocatalysts is a challenge for protein engineering and is a critical test of our understanding of enzyme catalysis. Here we describe the computational design of eight enzymes that use two different catalytic motifs to catalyse the Kemp elimination-a model reaction for proton transfer from carbon-with measured rate enhancements of up to 10(5) and multiple turnovers. Mutational analysis confirms that catalysis depends on the computationally designed active sites, and a high-resolution crystal structure suggests that the designs have close to atomic accuracy. Application of in vitro evolution to enhance the computational designs produced a >200-fold increase in k(cat)/K(m) (k(cat)/K(m) of 2,600 M(-1)s(-1) and k(cat)/k(uncat) of >10(6)). These results demonstrate the power of combining computational protein design with directed evolution for creating new enzymes, and we anticipate the creation of a wide range of useful new catalysts in the future.