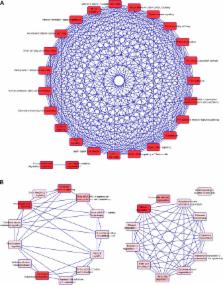 COPD is a chronic inflammatory disease of lung. The inflammatory response in COPD is associated with neutrophils, macrophages, T lymphocytes, and bronchial epithelial cells, and occurs mainly in the small airway, leading to irreversible airflow limitation.

In order to investigate the microRNA–mRNA interaction in the microenvironment of the COPD airway, we used next-generation sequencing and bioinformatics in this study.

Our results showed that miR6511a-5p– NT5E interaction plays an important role in COPD, which might be associated with cell–cell contact, activation of leukocytes, activation of T lymphocytes, and cellular homeostasis. These findings provide new information for further investigations of the COPD microenvironment, and may help to develop new diagnostic or therapeutic strategies targeting the bronchial epithelium for COPD.

Nathan C. Wong,  Xiaowei Wang (2014)
MicroRNAs (miRNAs) are small non-coding RNAs that are extensively involved in many physiological and disease processes. One major challenge in miRNA studies is the identification of genes regulated by miRNAs. To this end, we have developed an online resource, miRDB (http://mirdb.org), for miRNA target prediction and functional annotations. Here, we describe recently updated features of miRDB, including 2.1 million predicted gene targets regulated by 6709 miRNAs. In addition to presenting precompiled prediction data, a new feature is the web server interface that allows submission of user-provided sequences for miRNA target prediction. In this way, users have the flexibility to study any custom miRNAs or target genes of interest. Another major update of miRDB is related to functional miRNA annotations. Although thousands of miRNAs have been identified, many of the reported miRNAs are not likely to play active functional roles or may even have been falsely identified as miRNAs from high-throughput studies. To address this issue, we have performed combined computational analyses and literature mining, and identified 568 and 452 functional miRNAs in humans and mice, respectively. These miRNAs, as well as associated functional annotations, are presented in the FuncMir Collection in miRDB.

Emily Clough,  Tanya Barrett (2016)
The Gene Expression Omnibus (GEO) database is an international public repository that archives and freely distributes high-throughput gene expression and other functional genomics data sets. Created in 2000 as a worldwide resource for gene expression studies, GEO has evolved with rapidly changing technologies and now accepts high-throughput data for many other data applications, including those that examine genome methylation, chromatin structure, and genome-protein interactions. GEO supports community-derived reporting standards that specify provision of several critical study elements including raw data, processed data, and descriptive metadata. The database not only provides access to data for tens of thousands of studies, but also offers various Web-based tools and strategies that enable users to locate data relevant to their specific interests, as well as to visualize and analyze the data. This chapter includes detailed descriptions of methods to query and download GEO data and use the analysis and visualization tools. The GEO homepage is at http://www.ncbi.nlm.nih.gov/geo/.