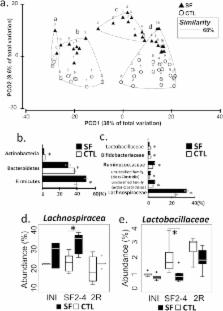 Chronic sleep fragmentation (SF) commonly occurs in human populations, and although it does not involve circadian shifts or sleep deprivation, it markedly alters feeding behaviors ultimately promoting obesity and insulin resistance. These symptoms are known to be related to the host gut microbiota. Mice were exposed to SF for 4 weeks and then allowed to recover for 2 weeks. Taxonomic profiles of fecal microbiota were obtained prospectively, and conventionalization experiments were performed in germ-free mice. Adipose tissue insulin sensitivity and inflammation, as well as circulating measures of inflammation, were assayed. Effect of fecal water on colonic epithelial permeability was also examined. Chronic SF-induced increased food intake and reversible gut microbiota changes characterized by the preferential growth of highly fermentative members of Lachnospiraceae and Ruminococcaceae and a decrease of Lactobacillaceae families. These lead to systemic and visceral white adipose tissue inflammation in addition to altered insulin sensitivity in mice, most likely via enhanced colonic epithelium barrier disruption. Conventionalization of germ-free mice with SF-derived microbiota confirmed these findings. Thus, SF-induced metabolic alterations may be mediated, in part, by concurrent changes in gut microbiota, thereby opening the way for gut microbiome-targeted therapeutics aimed at reducing the major end-organ morbidities of chronic SF.

Obesity and the human microbiome.

Ruth E Ley (2009)
Obesity was once rare, but the last few decades have seen a rapid expansion of the proportion of obese individuals worldwide. Recent work has shown obesity to be associated with a shift in the representation of the dominant phyla of bacteria in the gut, both in humans and animal models. This review summarizes the latest research into the association between microbial ecology and host adiposity, and the mechanisms by which microbes in the gut may mediate host metabolism in the context of obesity. Studies of the effect of excess body fat on the abundances of different bacteria taxa in the gut generally show alterations in the gastrointestinal microbiota, and changes during weight loss. The gastrointestinal microbiota have been shown to impact insulin resistance, inflammation, and adiposity via interactions with epithelial and endocrine cells. Large-scale alterations of the gut microbiota and its microbiome (gene content) are associated with obesity and are responsive to weight loss. Gut microbes can impact host metabolism via signaling pathways in the gut, with effects on inflammation, insulin resistance, and deposition of energy in fat stores. Restoration of the gut microbiota to a healthy state may ameliorate the conditions associated with obesity and help maintain a healthy weight.

Herbert Tilg,  Arthur Kaser (2011)
The prevalence of obesity and related disorders such as metabolic syndrome has vastly increased throughout the world. Recent insights have generated an entirely new perspective suggesting that our microbiota might be involved in the development of these disorders. Studies have demonstrated that obesity and metabolic syndrome may be associated with profound microbiotal changes, and the induction of a metabolic syndrome phenotype through fecal transplants corroborates the important role of the microbiota in this disease. Dietary composition and caloric intake appear to swiftly regulate intestinal microbial composition and function. As most findings in this field of research are based on mouse studies, the relevance to human biology requires further investigation.

C S Byrne,  E Chambers,  D J Morrison … (2015)
Over the last 20 years there has been an increasing interest in the influence of the gastrointestinal tract on appetite regulation. Much of the focus has been on the neuronal and hormonal relationship between the gastrointestinal tract and the brain. There is now mounting evidence that the colonic microbiota and their metabolic activity have a significant role in energy homeostasis. The supply of substrate to the colonic microbiota has a major impact on the microbial population and the metabolites they produce, particularly short chain fatty acids (SCFAs). SCFAs are produced when non-digestible carbohydrates, namely dietary fibres and resistant starch, undergo fermentation by the colonic microbiota. Both the consumption of fermentable carbohydrates and the administration of SCFAs have been reported to result in a wide range of health benefits including improvements in body composition, glucose homeostasis, blood lipid profiles and reduced body weight and colon cancer risk. However, published studies tend to report the effects that fermentable carbohydrates and SCFAs have on specific tissues and metabolic processes, and fail to explain how these local effects translate into systemic effects and the mitigation of disease risk. Moreover, studies tend to investigate SCFAs collectively and neglect to report the effects associated with individual SCFAs. Here, we bring together the recent evidence and suggest an overarching model for the effects of SCFAs on one of their beneficial aspects: appetite regulation and energy homeostasis.