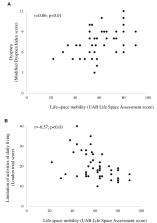 The aim of this study was to investigate whether limitation during the performance of activities of daily living (ADL) was associated with life-space mobility in older people with chronic obstructive pulmonary disease (COPD), and to generate a regression model for life-space mobility score.

This cross-sectional study with a convenience sample included older people (aged ≥60 years old) with COPD. We assessed participants’ lung function (spirometry), life-space mobility (University of Alabama at Birmingham Study of Aging Life-Space Assessment questionnaire), severity of dyspnea (Modified Dyspnea Index) and limitation during the performance of ADL (London Chest Activity of Daily Living). We used Pearson’s correlation to investigate the associations between the measures, and multiple linear regression to detect which of the measures influenced life-space mobility. Statistical significance was set at 5%.

Mobility difficulties and physical activity as predictors of mortality and loss of independence in the community-living older population.

T. Rantanen,  M Hirvensalo,  E Heikkinen (2000)
In older people, mobility impairments and physical inactivity are risk factors for further disability and death. We studied the interaction of physical activity and mobility impairment as a predictor of dependence and mortality. A population-based, prospective study. The data were collected in structured interviews in the year 1988 and 8 years later in the year 1996 as part of the Evergreen Project. Subjects were 1109 independently living, at baseline 65- to 84-year-old people in the city of Jyvaskyla, in central Finland. Participants were ranked into four groups: (1) Intact mobility and physically active (Mobile-Active), (2) Intact mobility and sedentary (Mobile-Sedentary), (3) Impaired mobility and physically active (Impaired-Active), and (4) Impaired mobility and sedentary (Impaired-Sedentary). The confounders adjusted for in the models included age, marital status, education, chronic conditions, smoking, and physical exercise earlier in life. In men and women, the relative risk of death was two times greater in Impaired-Active and three times greater in Impaired-Sedentary groups than the risk of death in Mobile-Active groups. However, the risk of death did not differ between Mobile-Active and Mobile-Sedentary groups. The odds ratio for dependency (95% confidence interval) in Impaired-Sedentary men was 5.21 (1.44-18.70) and in Impaired-Sedentary women was 2.92 (1.52-5.60) compared to Mobile-Active groups. The risk of dependence did not differ significantly between Mobile-Active, Mobile-Sedentary, and Impaired-Active groups. Mobility impairments predicted mortality and dependence. However, among people with impaired mobility, physical activity was associated with lower risks, whereas the risk did not differ according to activity level among those with intact mobility. Despite of their overall greater risk, mobility-impaired people may be able to prevent further disability and mortality by physical exercise.

Richard A. Marottoli,  J Jackson,  Patrick Phelan … (2012)
Optimal mobility, defined as relative ease and freedom of movement in all of its forms, is central to healthy aging. Mobility is a significant consideration for research, practice, and policy in aging and public health. We examined the public health burdens of mobility disability, with a particular focus on leading public health interventions to enhance walking and driving, and the challenges and opportunities for public health action. We propose an integrated mobility agenda, which draws on the lived experience of older adults. New strategies for research, practice, and policy are needed to move beyond categorical promotion programs in walking and driving to establish a comprehensive program to enhance safe mobility in all its forms.