Science to Practice: Translating Automated Brain MRI Volumetry in Alzheimer’s Disease from Research to Routine Diagnostic Use in the Work-Up of Dementia 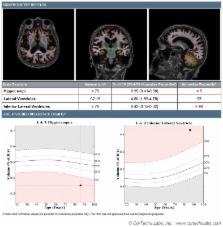 Memory and the hippocampus: a synthesis from findings with rats, monkeys, and humans.

Larry Squire (1992)
This article considers the role of the hippocampus in memory function. A central thesis is that work with rats, monkeys, and humans--which has sometimes seemed to proceed independently in 3 separate literatures--is now largely in agreement about the function of the hippocampus and related structures. A biological perspective is presented, which proposes multiple memory systems with different functions and distinct anatomical organizations. The hippocampus (together with anatomically related structures) is essential for a specific kind of memory, here termed declarative memory (similar terms include explicit and relational). Declarative memory is contrasted with a heterogeneous collection of nondeclarative (implicit) memory abilities that do not require the hippocampus (skills and habits, simple conditioning, and the phenomenon of priming). The hippocampus is needed temporarily to bind together distributed sites in neocortex that together represent a whole memory.

Introduction to the recommendations from the National Institute on Aging-Alzheimer's Association workgroups on diagnostic guidelines for Alzheimer's disease.

Guy M McKhann,  C Phelps,  Sibylle B Thies … (2011)
Criteria for the clinical diagnosis of Alzheimer's disease (AD) were established in 1984. A broad consensus now exists that these criteria should be revised to incorporate state-of-the-art scientific knowledge. The National Institute on Aging (NIA) and the Alzheimer's Association sponsored a series of advisory round table meetings in 2009 whose purpose was to establish a process for revising diagnostic and research criteria for AD. The recommendation from these advisory meetings was that three separate work groups should be formed with each assigned the task of formulating diagnostic criteria for one phase of the disease: the dementia phase; the symptomatic, pre-dementia phase; and the asymptomatic, preclinical phase of AD. Two notable differences from the AD criteria published in 1984 are incorporation of biomarkers of the underlying disease state and formalization of different stages of disease in the diagnostic criteria. There was a broad consensus within all three workgroups that much additional work is needed to validate the application of biomarkers for diagnostic purposes. In the revised NIA-Alzheimer's Association criteria, a semantic and conceptual distinction is made between AD pathophysiological processes and clinically observable syndromes that result, whereas this distinction was blurred in the 1984 criteria. The new criteria for AD are presented in three documents. The core clinical criteria of the recommendations regarding AD dementia and MCI due to AD are intended to guide diagnosis in the clinical setting. However, the recommendations of the preclinical AD workgroup are intended purely for research purposes. Copyright © 2011 The Alzheimer's Association. All rights reserved.

Robert Sapolsky (2000)
An extensive literature stretching back decades has shown that prolonged stress or prolonged exposure to glucocorticoids-the adrenal steroids secreted during stress-can have adverse effects on the rodent hippocampus. More recent findings suggest a similar phenomenon in the human hippocampus associated with many neuropsychiatric disorders. This review examines the evidence for hippocampal atrophy in (1) Cushing syndrome, which is characterized by a pathologic oversecretion of glucocorticoids; (2) episodes of repeated and severe major depression, which is often associated with hypersecretion of glucocorticoids; and (3) posttraumatic stress disorder. Key questions that will be examined include whether the hippocampal atrophy arises from the neuropsychiatric disorder, or precedes and predisposes toward it; whether glucocorticoids really are plausible candidates for contributing to the atrophy; and what cellular mechanisms underlie the overall decreases in hippocampal volume. Explicit memory deficits have been demonstrated in Cushing syndrome, depression, and posttraumatic stress disorder; an extensive literature suggests that hippocampal atrophy of the magnitude found in these disorders can give rise to such cognitive deficits.

This article was submitted to Neurodegeneration, a section of the journal Frontiers in Neurology.