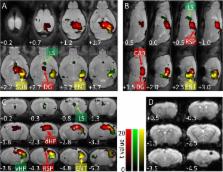 The dorsal and ventral hippocampal regions (dHP and vHP) are proposed to have distinct functions. Electrophysiological studies have revealed intra-hippocampal variances along the dorsoventral axis. Nevertheless, the extra-hippocampal influences of dHP and vHP activities remain unclear. In this study, we compared the spatial distribution of brain-wide responses upon dHP or vHP activation and further estimate connection strengths between the dHP and the vHP with corresponding extra-hippocampal areas. To achieve this, we first investigated responses of local field potential (LFP) and multi unit activities (MUA) upon light stimulation in the hippocampus of an anesthetized transgenic mouse, whose CA1 pyramidal neurons expressed a step-function opsin variant of channelrhodopsin-2 (ChR2). Optogenetic stimulation increased hippocampal LFP power at theta, gamma, and ultra-fast frequency bands, and augmented MUA, indicating light-induced activation of CA1 pyramidal neurons. Brain-wide responses examined using fMRI revealed that optogenetic activation at the dHP or vHP caused blood oxygenation level-dependent (BOLD) fMRI signals in situ. Although activation at the dHP induced BOLD responses at the vHP, the opposite was not observed. Outside the hippocampal formation, activation at the dHP, but not the vHP, evoked BOLD responses at the retrosplenial cortex (RSP), which is in line with anatomical evidence. In contrast, BOLD responses at the lateral septum (LS) were induced only upon vHP activation, even though both dHP and vHP send axonal fibers to the LS. Our findings suggest that the primary targets of dHP and vHP activation are distinct, which concurs with attributed functions of the dHP and RSP in spatial memory, as well as of the vHP and LS in emotional responses.

Unsupervised spike detection and sorting with wavelets and superparamagnetic clustering.

R Quiroga,  Z Nádasdy,  Y Shaul (2004)
This study introduces a new method for detecting and sorting spikes from multiunit recordings. The method combines the wavelet transform, which localizes distinctive spike features, with superparamagnetic clustering, which allows automatic classification of the data without assumptions such as low variance or gaussian distributions. Moreover, an improved method for setting amplitude thresholds for spike detection is proposed. We describe several criteria for implementation that render the algorithm unsupervised and fast. The algorithm is compared to other conventional methods using several simulated data sets whose characteristics closely resemble those of in vivo recordings. For these data sets, we found that the proposed algorithm outperformed conventional methods.

A Oeltermann,  Nikos Logothetis,  M Augath … (2006)
Most functional brain imaging studies use task-induced hemodynamic responses to infer underlying changes in neuronal activity. In addition to increases in cerebral blood flow and blood oxygenation level-dependent (BOLD) signals, sustained negative responses are pervasive in functional imaging. The origin of negative responses and their relationship to neural activity remain poorly understood. Through simultaneous functional magnetic resonance imaging and electrophysiological recording, we demonstrate a negative BOLD response (NBR) beyond the stimulated regions of visual cortex, associated with local decreases in neuronal activity below spontaneous activity, detected 7.15 +/- 3.14 mm away from the closest positively responding region in V1. Trial-by-trial amplitude fluctuations revealed tight coupling between the NBR and neuronal activity decreases. The NBR was associated with comparable decreases in local field potentials and multiunit activity. Our findings indicate that a significant component of the NBR originates in neuronal activity decreases.

This work was supported by KAKENHI Grants (25430011 and 25115726 to N.T., 24111551 to K.F.T.) and "Funding Program for World-Leading Innovative R&D on Science and Technology (FIRST Program)" to H.O. from Japan Society for the Promotion of Science and the Ministry of Education, Culture, Sports, Science, and Technology of Japan. The funders had no role in study design, data collection and analysis, decision to publish, or preparation of the manuscript.