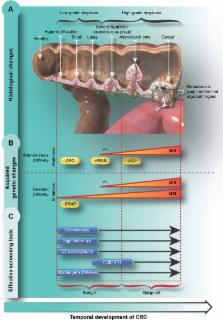 Most colon tumors develop via a multistep process involving a series of histological, morphological, and genetic changes that accumulate over time. This has allowed for screening and detection of early-stage precancerous polyps before they become cancerous in individuals at average risk for colorectal cancer (CRC), which may lead to substantial decreases in the incidence of CRC. Despite the known benefits of early screening, CRC remains the second leading cause of cancer-related deaths in the United States. Hence, it is important for health care providers to have an understanding of the risk factors for CRC and various stages of disease development in order to recommend appropriate screening strategies. This article provides an overview of the histological/molecular changes that characterize the development of CRC. It describes the available CRC screening methods and their advantages and limitations and highlights the stages of CRC development in which each screening method is most effective.

Jack Mandel,  John Bond,  Timothy R Church … (1993)
Although tests for occult blood in the feces are widely used to screen for colorectal cancers, there is no conclusive evidence that they reduce mortality from this cause. We evaluated a fecal occult-blood test in a randomized trial and documented its effectiveness. We randomly assigned 46,551 participants 50 to 80 years of age to screening for colorectal cancer once a year, to screening every two years, or to a control group. Participants who were screened submitted six guaiac-impregnated paper slides with two smears from each of three consecutive stools. About 83 percent of the slides were rehydrated. Participants who tested positive underwent a diagnostic evaluation that included colonoscopy. Vital status was ascertained for all study participants during 13 years of follow-up. A committee determined causes of death. A single pathologist determined the stage of each tissue specimen. Differences in mortality from colorectal cancer, the primary study end point, were monitored with the sequential log-rank statistic. The 13-year cumulative mortality per 1000 from colorectal cancer was 5.88 in the annually screened group (95 percent confidence interval, 4.61 to 7.15), 8.33 in the biennially screened group (95 percent confidence interval, 6.82 to 9.84), and 8.83 in the control group (95 percent confidence interval, 7.26 to 10.40). The rate in the annually screened group, but not in the biennially screened group, was significantly lower than that in the control group. Reduced mortality in the annually screened group was accompanied by improved survival in those with colorectal cancer and a shift to detection at an earlier stage of cancer. Annual fecal occult-blood testing with rehydration of the samples decreased the 13-year cumulative mortality from colorectal cancer by 33 percent.

Screening and surveillance for the early detection of colorectal cancer and adenomatous polyps, 2008: a joint guideline from the American Cancer Society, the US Multi-Society Task Force on Colorectal Cancer, and the American College of Radiology.

Bernard Levin,  David Lieberman,  Beth McFarland … (2008)
In the United States, colorectal cancer (CRC) is the third most common cancer diagnosed among men and women and the second leading cause of death from cancer. CRC largely can be prevented by the detection and removal of adenomatous polyps, and survival is significantly better when CRC is diagnosed while still localized. In 2006 to 2007, the American Cancer Society, the US Multi-Society Task Force on Colorectal Cancer, and the American College of Radiology came together to develop consensus guidelines for the detection of adenomatous polyps and CRC in asymptomatic average-risk adults. In this update of each organization's guidelines, screening tests are grouped into those that primarily detect cancer early and those that can detect cancer early and also can detect adenomatous polyps, thus providing a greater potential for prevention through polypectomy. When possible, clinicians should make patients aware of the full range of screening options, but at a minimum they should be prepared to offer patients a choice between a screening test that primarily is effective at early cancer detection and a screening test that is effective at both early cancer detection and cancer prevention through the detection and removal of polyps. It is the strong opinion of these 3 organizations that colon cancer prevention should be the primary goal of screening.