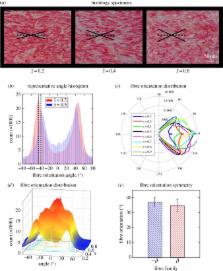 This study aims at determining the in vitro anisotropic mechanical behaviour of canine aortic tissue. We specifically focused on spatial variations of these properties along the axis of the vessel. We performed uniaxial stretch tests on canine aortic samples in both circumferential and longitudinal directions, as well as histological examinations to derive the tissue's fibre orientations. We subsequently characterized a constitutive model that incorporates both phenomenological and structural elements to account for macroscopic and microstructural behaviour of the tissue. We showed the two fibre families were oriented at similar angles with respect to the aorta's axis. We also found significant changes in mechanical behaviour of the tissue as a function of axial position from proximal to distal direction: the fibres become more aligned with the aortic axis from 46° to 30°. Also, the linear shear modulus of media decreased as we moved distally along the aortic axis from 139 to 64 kPa. These changes derived from the parameters in the nonlinear constitutive model agreed well with the changes in tissue structure. In addition, we showed that isotropic contribution, carried by elastic lamellae, to the total stress induced in the tissue decreases at higher stretch ratios, whereas anisotropic stress, carried by collagen fibres, increases. The constitutive models can be readily used to design computational models of tissue deformation during physiological loading cycles. The findings of this study extend the understanding of local mechanical properties that could lead to region-specific diagnostics and treatment of arterial diseases.

M. Unser,  Michael Sage,  A Griffa … (2012)
Mechanical properties of the adventitia are largely determined by the organization of collagen fibers. Measurements on the waviness and orientation of collagen, particularly at the zero-stress state, are necessary to relate the structural organization of collagen to the mechanical response of the adventitia. Using the fluorescence collagen marker CNA38-OG488 and confocal laser scanning microscopy, we imaged collagen fibers in the adventitia of rabbit common carotid arteries ex vivo. The arteries were cut open along their longitudinal axes to get the zero-stress state. We used semi-manual and automatic techniques to measure parameters related to the waviness and orientation of fibers. Our results showed that the straightness parameter (defined as the ratio between the distances of endpoints of a fiber to its length) was distributed with a beta distribution (mean value 0.72, variance 0.028) and did not depend on the mean angle orientation of fibers. Local angular density distributions revealed four axially symmetric families of fibers with mean directions of 0°, 90°, 43° and -43°, with respect to the axial direction of the artery, and corresponding circular standard deviations of 40°, 47°, 37° and 37°. The distribution of local orientations was shifted to the circumferential direction when measured in arteries at the zero-load state (intact), as compared to arteries at the zero-stress state (cut-open). Information on collagen fiber waviness and orientation, such as obtained in this study, could be used to develop structural models of the adventitia, providing better means for analyzing and understanding the mechanical properties of vascular wall.

T. Gasser,  Gerhard A. Holzapfel,  Nicole Sommer … (2005)
At autopsy, 13 nonstenotic human left anterior descending coronary arteries [71.5 +/- 7.3 (mean +/- SD) yr old] were harvested, and related anamnesis was documented. Preconditioned prepared strips (n = 78) of segments from the midregion of the left anterior descending coronary artery from the individual layers in axial and circumferential directions were subjected to cyclic quasi-static uniaxial tension tests, and ultimate tensile stresses and stretches were documented. The ratio of outer diameter to total wall thickness was 0.189 +/- 0.014; ratios of adventitia, media, and intima thickness to total wall thickness were 0.4 +/- 0.03, 0.36 +/- 0.03, and 0.27 +/- 0.02, respectively; axial in situ stretch of 1.044 +/- 0.06 decreased with age. Stress-stretch responses for the individual tissues showed pronounced mechanical heterogeneity. The intima is the stiffest layer over the whole deformation domain, whereas the media in the longitudinal direction is the softest. All specimens exhibited small hysteresis and anisotropic and strong nonlinear behavior in both loading directions. The media and intima showed similar ultimate tensile stresses, which are on average three times smaller than ultimate tensile stresses in the adventitia (1,430 +/- 604 kPa circumferential and 1,300 +/- 692 kPa longitudinal). The ultimate tensile stretches are similar for all tissue layers. A recently proposed constitutive model was extended and used to represent the deformation behavior for each tissue type over the entire loading range. The study showed the need to model nonstenotic human coronary arteries with nonatherosclerotic intimal thickening as a composite structure composed of three solid mechanically relevant layers with different mechanical properties. The intima showed significant thickness, load-bearing capacity, and mechanical strength compared with the media and adventitia.

The reason for the shape of the distensibility curves of arteries.