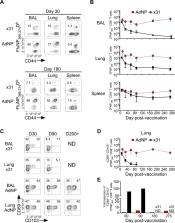 Tissue resident memory T cells (T RM) in the lungs are pivotal for protection against repeated infection with respiratory viruses. However, the gradual loss of these cells over time and the associated decline in clinical protection represent a serious limit in the development of efficient T-cell based vaccines against respiratory pathogens. Here, using an adenovirus expressing influenza nucleoprotein (AdNP) we show that CD8 T RM in the lungs can be maintained for at least one year post-vaccination. Our results reveal that lung T RM continued to proliferate in-situ 8 months after AdNP vaccination. Importantly, this required airway vaccination and antigen persistence in the lung, as non-respiratory routes of vaccination failed to support long-term lung T RM maintenance. Additionally, parabiosis experiments show that in AdNP vaccinated mice, the lung T RM pool is also sustained by continual replenishment from circulating memory CD8 T cells that differentiate into lung T RM, a phenomenon not observed in influenza infected parabiont partners. Concluding, these results demonstrates key requirements for long-lived cellular immunity to influenza virus, knowledge that could be utilized in future vaccine design.

Alexandre P. Benechet,  Tae Lee,  Yinghong Hu … (2014)
Previous studies have shown that some respiratory virus infections leave local populations of tissue TRM cells in the lungs which disappear as heterosubtypic immunity declines. The location of these TRM cells and their contribution to the protective CTL response have not been clearly defined. Here, fluorescence microscopy is used to show that some CD103(+) TRM cells remain embedded in the walls of the large airways long after pulmonary immunization but are absent from systemically primed mice. Viral clearance from the lungs of the locally immunized mice precedes the development of a robust Teff response in the lungs. Whereas large numbers of virus-specific CTLs collect around the bronchial tree during viral clearance, there is little involvement of the remaining lung tissue. Much larger numbers of TEM cells enter the lungs of the systemically immunized animals but do not prevent extensive viral replication or damage to the alveoli. Together, these experiments show that virus-specific antibodies and TRM cells are both required for optimal heterosubtypic immunity, whereas circulating memory CD8 T cells do not substantially alter the course of disease.

These first authors contributed equally to this work

These last authors contributed equally to this work