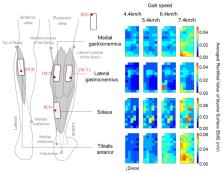 Surface electromyography (EMG) has been used to estimate muscle work and physiological burden of the whole body during human movements. However, there are spatial variations in surface EMG responses within individual muscles. The aim of this study was to investigate the relation between oxygen consumption and surface EMG responses of lower leg muscles during walking at various speeds and to quantify its spatial variation within an individual muscle. Nine young males walked on a treadmill at four speeds: preferred minus 1 km/h, preferred, preferred plus 1 km/h, and preferred plus 2 km/h, and the metabolic response was measured based on the expired gas. High-density surface EMG of the tibialis anterior (TA), medial gastrocnemius (MG), lateral gastrocnemius, and soleus muscles was performed using 64 two-dimensional electrode grids. Correlation coefficients between oxygen consumption and the surface EMG amplitude were calculated across the gait speeds for each channel in the electrode grid and for individual muscles. Mean correlation coefficients across electrodes were 0.69–0.87 for the four individual muscles, and the spatial variation of correlation between the surface EMG amplitude and oxygen consumption within an electrode grid was significantly greater in MG muscle than in TA muscle (Quartile deviations: 0.24 for MG and 0.02 for TA, p < 0.05). These results suggest that the physiological burden of the whole body during gait at various speeds can be estimated from the surface EMG amplitude of calf muscles, but we need to note its spatial distribution within the MG muscle.

Contributions of the individual ankle plantar flexors to support, forward progression and swing initiation during walking.

R.R. Neptune,  S.A. Kautz,  F.E. Zajac (2001)
Walking is a motor task requiring coordination of many muscles. Previous biomechanical studies, based primarily on analyses of the net ankle moment during stance, have concluded different functional roles for the plantar flexors. We hypothesize that some of the disparities in interpretation arise because of the effects of the uniarticular and biarticular muscles that comprise the plantar flexor group have not been separated. Furthermore, we believe that an accurate determination of muscle function requires quantification of the contributions of individual plantar flexor muscles to the energetics of individual body segments. In this study, we examined the individual contributions of the ankle plantar flexors (gastrocnemius (GAS); soleus (SOL)) to the body segment energetics using a musculoskeletal model and optimization framework to generate a forward dynamics simulation of normal walking at 1.5 m/s. At any instant in the gait cycle, the contribution of a muscle to support and forward progression was defined by its contribution to trunk vertical and horizontal acceleration, respectively, and its contribution to swing initiation by the mechanical energy it delivers to the leg in pre-swing (i.e., double-leg stance prior to toe-off). GAS and SOL were both found to provide trunk support during single-leg stance and pre-swing. In early single-leg stance, undergoing eccentric and isometric activity, they accelerate the trunk vertically but decelerate forward trunk progression. In mid single-leg stance, while isometric, GAS delivers energy to the leg while SOL decelerates it, and SOL delivers energy to the trunk while GAS decelerates it. In late single-leg stance through pre-swing, though GAS and SOL both undergo concentric activity and accelerate the trunk forward while decelerating the downward motion of the trunk (i.e., providing forward progression and support), they execute different energetic functions. The energy produced from SOL accelerates the trunk forward, whereas GAS delivers almost all its energy to accelerate the leg to initiate swing. Although GAS and SOL maintain or accelerate forward motion in mid single-leg stance through pre-swing, other muscles acting at the beginning of stance contribute comparably to forward progression. In summary, throughout single-leg stance both SOL and GAS provide vertical support, in mid single-leg stance SOL and GAS have opposite energetic effects on the leg and trunk to ensure support and forward progression of both the leg and trunk, and in pre-swing only GAS contributes to swing initiation.

D.A. Winter,  H.J. Yack (1987)
The EMG patterns for 16 muscles involved in human walking are reported along with stride-to-stride and inter-subject variability measures. These profiles and measures were developed for basic researchers and clinical investigators as a baseline reference of motor patterns and for use in the diagnosis of gait pathologies. Evident from a comparison of these patterns were some fundamental aspects of the neuromuscular control and the mechanical demands of walking. These comparisons can be summarized as follows: (1) The distal support muscles (soleus, tibialis anterior, gastrocnemii) are the most active muscles, the more proximal muscles are least active. (2) The least variable EMG patterns, as quantified by the normalized inter-subject variability measures, are seen in the most distal single joint muscles, the most variable are the more proximal muscles. The EMGs of the biarticulate muscles, both proximal and distal, exhibit higher variability than the EMGs of the single joint muscles. (3) The detailed patterns and levels of EMG activity demonstrate the different mechanical tasks of each muscle over the gait cycle.

Age causes a redistribution of joint torques and powers during gait.

T. Hortobágyi,  P DeVita (2000)
At self-selected walking speeds, elderly compared with young adults generate decreased joint torques and powers in the lower extremity. These differences may be actual gait-limiting factors and neuromuscular adaptations with age or simply a consciously selected motor pattern to produce a slower gait. The purpose of the study was to compare joint torques and powers of young and elderly adults walking at the same speed. Twelve elderly and fourteen young adults (ages 69 and 21 yr) walked at 1.48 m/s over a force platform while being videotaped. Hip, knee, and ankle torques and powers were calculated from the reaction force and kinematic data. A support torque was calculated as the sum of the three joint torques. Extensor angular impulse during stance and positive work at each joint were derived from the torques and powers. Step length was 4% shorter and cadence was 4% higher in elderly adults (both P < 0.05) compared with young adults. Support angular impulse was nearly identical between groups, but elderly adults had 58% greater angular impulse and 279% more work at the hip, 50% less angular impulse and 39% less work at the knee, and 23% less angular impulse and 29% less work at the ankle compared with young adults (t-test, all P < 0.05). Age caused a redistribution of joint torques and powers, with the elderly using their hip extensors more and their knee extensors and ankle plantar flexors less than young adults when walking at the same speed. Along with a reduction in motor and sensory functions, the natural history of aging causes a shift in the locus of function in motor performance.