Thematic Analysis of My “Coming Out” Experiences Through an Intersectional Lens: An Autoethnographic Study 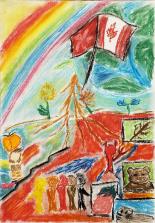 For lesbian, gay, bisexual, transgender, and queer (LGBTQ) youth, identity development is one of the most critical developmental task. LGBTQ youth are shown to be at risk for a variety of risk factors including depression and suicidal ideation and attempts due to how their identities are appraised in heteronormative societies. However, most LGBTQ educational psychology research have highlighted protective factors that are primarily relevant to support LGBTQ white-youth. One of the major developmental theories, Erikson’s stages of psychosocial development, has identified adolescence as the period where identity development occurs. However, through an intersectional lens, identity development appears to encompass more than adolescence but also emerging adulthood, a developmental stage not accounted for by Erikson’s stages of psychosocial development. The primary goal of this study is to seek to understand and question Erikson’s stages of psychosocial development through an intersectional lens of an autoethnography of my LGBTQ experiences. An autoethnographic approach [diary entries ( N = 9), conversations ( N = 12), interview ( N = 1), social media websites and blogs ( N = 2), and drawing ( N = 1)] is used to understand my LGBTQ-person of color (POC) experiences of “coming out” or self-disclosure during my adolescence through emerging adulthood. Data was collected on April 2020 and spanned from 2006 through 2020 to account for the developmental period of adolescence and emerging adulthood (ages 13 through 27). Thematic analysis revealed four themes across the two developmental periods: (1) confusion and conflict between my gay and ethnic identity as a closeted adolescent, (2) my first “coming out” as a gay adolescent and “it got better,” (3) frustration arising from the internal conflict between my gay and POC identity as an emerging adult, and (4) frustration arising from external experiences with the flaws of LGBTQ community inclusivity. Results reflected a continuous theme of identity exploration and struggle through both adolescence and emerging adulthood, highlighting the need for future research to replicate similar experiences from other intersectional individuals during emerging adulthood stage, a developmental stage that is considered in between Erikson’s adolescent and young adulthood developmental stage.

Mapping the Margins: Intersectionality, Identity Politics, and Violence against Women of Color

Emerging adulthood: A theory of development from the late teens through the twenties.

Emotional distress among LGBT youth: the influence of perceived discrimination based on sexual orientation.

Joanna Almeida,  Renee Johnson,  Heather Corliss … (2009)
The authors evaluated emotional distress among 9th-12th grade students, and examined whether the association between being lesbian, gay, bisexual, and/or transgendered (i.e., "LGBT") and emotional distress was mediated by perceptions of having been treated badly or discriminated against because others thought they were gay or lesbian. Data come from a school-based survey in Boston, Massachusetts (n = 1,032); 10% were LGBT, 58% were female, and ages ranged from 13 to 19 years. About 45% were Black, 31% were Hispanic, and 14% were White. LGBT youth scored significantly higher on the scale of depressive symptomatology. They were also more likely than heterosexual, non-transgendered youth to report suicidal ideation (30% vs. 6%, p < 0.0001) and self-harm (21% vs. 6%, p < 0.0001). Mediation analyses showed that perceived discrimination accounted for increased depressive symptomatology among LGBT males and females, and accounted for an elevated risk of self-harm and suicidal ideation among LGBT males. Perceived discrimination is a likely contributor to emotional distress among LGBT youth.

This article was submitted to Gender, Sex and Sexualities, a section of the journal Frontiers in Psychology