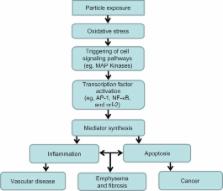 The specific component responsible and the mechanistic pathway for increased human morbidity and mortality after cigarette smoking are yet to be delineated. We propose that 1) injury and disease following cigarette smoking are associated with exposure to and retention of particles produced during smoking and 2) the biological effects of particles associated with cigarette smoking share a single mechanism of injury with all particles. Smoking one cigarette exposes the human respiratory tract to between 15,000 and 40,000 μg particulate matter; this is a carbonaceous product of an incomplete combustion. There are numerous human exposures to other particles, and these vary widely in composition, absolute magnitude, and size of the particle. Individuals exposed to all these particles share a common clinical presentation with a loss of pulmonary function, increased bronchial hyperresponsiveness, pathologic changes of emphysema and fibrosis, and comorbidities, including cardiovascular disease, cerebrovascular disease, peripheral vascular disease, and cancers. Mechanistically, all particle exposures produce an oxidative stress, which is associated with a series of reactions, including an activation of kinase cascades and transcription factors, release of inflammatory mediators, and apoptosis. If disease associated with cigarette smoking is recognized to be particle related, then certain aspects of the clinical presentation can be predicted; this would include worsening of pulmonary function and progression of pathological changes and comorbidity (eg, emphysema and carcinogenesis) after smoking cessation since the particle is retained in the lung and the exposure continues.

Increased particulate air pollution and the triggering of myocardial infarction.

Annette Peters,  Douglas Dockery,  James Muller … (2001)
Elevated concentrations of ambient particulate air pollution have been associated with increased hospital admissions for cardiovascular disease. Whether high concentrations of ambient particles can trigger the onset of acute myocardial infarction (MI), however, remains unknown. We interviewed 772 patients with MI in the greater Boston area between January 1995 and May 1996 as part of the Determinants of Myocardial Infarction Onset Study. Hourly concentrations of particle mass <2.5 microm (PM(2.5)), carbon black, and gaseous air pollutants were measured. A case-crossover approach was used to analyze the data for evidence of triggering. The risk of MI onset increased in association with elevated concentrations of fine particles in the previous 2-hour period. In addition, a delayed response associated with 24-hour average exposure 1 day before the onset of symptoms was observed. Multivariate analyses considering both time windows jointly revealed an estimated odds ratio of 1.48 associated with an increase of 25 microg/m(3) PM(2.5) during a 2-hour period before the onset and an odds ratio of 1.69 for an increase of 20 microg/m(3) PM(2.5) in the 24-hour period 1 day before the onset (95% CIs 1.09, 2.02 and 1.13, 2.34, respectively). The present study suggests that elevated concentrations of fine particles in the air may transiently elevate the risk of MIs within a few hours and 1 day after exposure. Further studies in other locations are needed to clarify the importance of this potentially preventable trigger of MI.