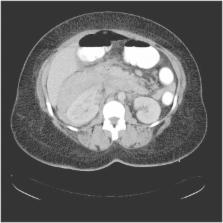 Cocaine abuse may contribute to the diverse forms of renal injury. We report a case of a pregnant woman who developed a large subcapsular renal haematoma after cocaine intoxication at 18-week gestation. She stabilized on conservative management and presented again at 29-week gestation with pre-eclampsia, acute renal failure and fetal demise. She required caesarean section delivery and intensive antihypertensive therapy to control severe pre-eclampsia associated with cocaine intoxication. This case is unique in that it is the first report of cocaine intoxication in pregnancy complicated by subcapsular haemorrhage. We discuss the possible mechanisms for the occurrence of this complication.

Jian Qing Zhang,  Julia R Fielding,  Kelly Zou (2002)
We determine the most common etiology of spontaneous perirenal hemorrhage. A MEDLINE search of the English language literature from 1985 to 1999 revealed 47 publications and 165 cases of spontaneous renal hemorrhage meeting our study entry criteria. These criteria were presentation of raw data including imaging modality, pathological confirmation (123 cases) or long-term (greater than 2 years) (42) imaging and/or clinical followup and no history of recent trauma, anticoagulant use, dialysis or renal transplant. Meta-analysis was performed using analysis of counts derived from contingency tables and pooled and stratified analysis. Hemorrhage was identified by ultrasound in 56 of 100 cases (56%) and by computerized tomography (CT) in all 135 cases assessed (100%). Etiology was correctly identified with an overall sensitivity and specificity of 0.11 and 0.33 for ultrasound and 0.57 and 0.82 for CT. Angiography in 81 cases revealed active bleeding in 11. The most common etiology of spontaneous renal hemorrhage was benign or malignant neoplasm (101 cases, 61%) with angiomyolipoma being predominant (48) followed closely by renal cell carcinoma (43). Vascular disease was the next most common offender (28 cases, 17%) with polyarteritis nodosa occurring most frequently (20). The most common cause of spontaneous perirenal hemorrhage is renal neoplasm and approximately 50% of such neoplasms are malignant. CT is the method of choice for evaluation of perirenal hemorrhage, although its sensitivity for detection of underlying etiology is only moderate.

Cocaine and the kidney: a synthesis of pathophysiologic and clinical perspectives.

William Riley,  C Nzerue,  Nancy Lowe (2000)
Cocaine abuse has reached epidemic proportions in the United States, and several forms of renal disease have been associated with this widespread use. The hemodynamic actions of cocaine, as well as its effects on matrix synthesis, glomerular inflammation, and glomerulosclerosis, may contribute to renal injury. Cocaine abuse has been associated with various forms of acute renal failure and acid-base and/or electrolyte disorders and may also have a role in the progression of chronic renal failure to end-stage renal disease. In utero exposure to cocaine has been associated with urogenital tract anomalies. Medical management of a hypertensive emergency caused by acute cocaine toxicity requires a multisystem approach, with close monitoring of cardiac, neurological, and renal functions.