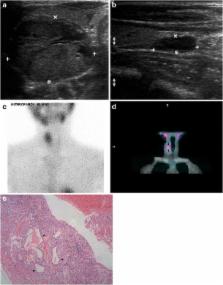 To describe atypical ultrasound features of parathyroid lesions and correlate them with clinical presentation and histopathology.

Retrospective review of 264 patients with primary hyperparathyroidism who underwent ultrasound imaging prior to parathyroidectomy was performed. Patients with atypical ultrasound findings (n = 26) were identified; imaging findings were correlated with clinical presentation and histopathology.

Twenty-one (80 %) lesions were adenomas, two (8 %) were adenomas with cellular atypia, and three (11.5 %) were carcinomas. Seventeen (65 %) lesions showed cystic change; five (19 %) of them had >50 % cystic change. These lesions were adenomas with cystic degeneration. Cystic degeneration had significant positive correlation with the lesion size and PTH level, but cystic adenomas correlated negatively with lesion weight. Six (23 %) lesions were isoechoic and one (4 %) was hyperechoic; histology predominantly revealed haemorrhage, hyalinisation and fibrosis; one lesion showed fat deposition and another had multiple granulomas within the adenoma. Twenty (83 %) lesions had heterogeneous echotexture and showed combinations of acinar dilatation, necrosis, haemorrhage and fibrosis. Heterogeneous lesions tended to be significantly larger and heavier, and they were associated with higher PTH levels. Four (15 %) lesions had calcifications. Scintigraphy was concordant in 22 (96 %), n = 23. One scintigraphy-negative lesion was a cystic parathyroid adenoma.

3. Heterogeneous parathyroid adenomas are larger in size and heavier, and they have higher PTH levels.

Parathyroid imaging: technique and role in the preoperative evaluation of primary hyperparathyroidism.

Mitchell Tublin,  Tanya Johnson,  Linwah Yip (2010)
The purpose of this study was to describe the typical ultrasound features of cystic parathyroid adenoma. A review of a surgical database and electronic medical records from 2006 to 2009 identified the cases of 15 patients who underwent preoperative cervical sonography for primary hyperparathyroidism with subsequent resection of pathologically proven parathyroid adenoma with predominantly cystic components. Two radiologists retrospectively evaluated the preoperative ultrasound images and assessed for cyst complexity, size, location, and color Doppler vascularity. Technetium-99m-sestamibi SPECT findings, surgical and pathologic reports, and the results of parathyroid hormone assay of the cyst fluid also were reviewed. Most of the cystic adenomas (14/15, 93%) were deep or inferolateral to the adjacent thyroid. The same percentage were elongated and had peripheral nodular components. An echogenic border separating the adenoma from the overlying thyroid was identified in 9 of 15 patients (60%). Color Doppler examination of 14 patients showed feeding vessels with internal color flow to the solid components in 10 patients (71%). Six of 14 patients underwent preoperative or intraoperative sampling of cyst fluid, and the assay showed the parathyroid hormone levels ranged from 1,198 to greater than 5,000 pg/mL. Fourteen of 15 patients underwent preoperative sestamibi SPECT, and the adenoma was definitively localized in four patients (29%). The accuracy of preoperative localization improved to 79% (11/14) when sestamibi SPECT scans were interpreted in correlation with cervical ultrasound images. Awareness of typical sonographic features (location, color Doppler vascularity) may aid radiologists in preoperative localization of parathyroid adenomas, even when cystic degeneration occurs. In cases in which imaging or clinical features are equivocal, the results of cyst fluid sampling and parathyroid hormone assay are confirmatory.