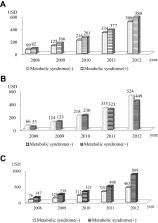 Metabolic syndrome (MetS) is a well-known comorbidity of chronic obstructive pulmonary disease (COPD). However, their interrelationship, particularly in early COPD, remains unclear. Therefore, we aimed to assess the prevalence and clinical characteristics of MetS in patients with early COPD, and to explore the impact of MetS on the frequency of COPD exacerbations and associated medical costs.

We retrospectively enrolled 43,874 subjects from the KNHANES, including 2164 patients with early COPD (≥40 years old), recorded smoking history, and Global Initiative for Chronic Obstructive Lung Disease spirometric grade I or II, with data linked to the NHI database. We extracted and analyzed data regarding health-care utilization and medical costs for 5 years (2007 to 2012).

Prevalence and outcomes of diabetes, hypertension and cardiovascular disease in COPD.

D. Mannino,  A Swensen,  Michael Thorn … (2008)
Chronic obstructive pulmonary disease (COPD) is associated with important chronic comorbid diseases, including cardiovascular disease, diabetes and hypertension. The present study analysed data from 20,296 subjects aged > or =45 yrs at baseline in the Atherosclerosis Risk in Communities Study (ARIC) and the Cardiovascular Health Study (CHS). The sample was stratified based on baseline lung function data, according to modified Global Initiative for Obstructive Lung Disease (GOLD) criteria. Comorbid disease at baseline and death and hospitalisations over a 5-yr follow-up were then searched for. Lung function impairment was found to be associated with more comorbid disease. In logistic regression models adjusting for age, sex, race, smoking, body mass index and education, subjects with GOLD stage 3 or 4 COPD had a higher prevalence of diabetes (odds ratio (OR) 1.5, 95% confidence interval (CI) 1.1-1.9), hypertension (OR 1.6, 95% CI 1.3-1.9) and cardiovascular disease (OR 2.4, 95% CI 1.9-3.0). Comorbid disease was associated with a higher risk of hospitalisation and mortality that was worse in people with impaired lung function. Lung function impairment is associated with a higher risk of comorbid disease, which contributes to a higher risk of adverse outcomes of mortality and hospitalisations.

Soo A Lim,  Hayley Shin,  Jung Han Song … (2011)
OBJECTIVE The number of people with metabolic syndrome is increasing worldwide, and changes in socioenvironmental factors contribute to this increase. Therefore, investigation of changes in metabolic syndrome and its components in South Korea, where rapid socioenvironmental changes have occurred in recent years, would be foundational in setting up an effective strategy for reducing this increasing trend. RESEARCH DESIGN AND METHODS We compared the prevalence and pattern of metabolic syndrome among participants in the Korean National Health and Nutrition Examination Surveys for 1998, 2001, 2005, and 2007. In each survey, stratified, multistage, probability–sampling designs and weighting adjustments were conducted to represent the entire Korean population. The revised National Cholesterol Education Program criteria were used as the definition of metabolic syndrome. All biochemical parameters were measured in a central laboratory. RESULTS A total of 6,907 (mean ± SE age 45.0 ± 0.2 years), 4,536 (45.5 ± 0.2), 5,373 (47.1 ± 0.2), and 2,890 (49.9 ± 0.3) Koreans over 20 years of age have participated in the studies in 1998, 2001, 2005, and 2007, respectively. The age-adjusted prevalence of metabolic syndrome increased significantly from 24.9% in 1998, 29.2% in 2001, and 30.4% in 2005 to 31.3% in 2007. Among the five components, the level of low HDL cholesterol increased the most, by 13.8% over the 10 years. Abdominal obesity and hypertriglyceridemia followed, with 8.7 and 4.9% increases, respectively. CONCLUSIONS Because dyslipidemia and abdominal obesity were major factors in increasing the prevalence of metabolic syndrome in Koreans for the past 10 years, lifestyle interventions should be conducted at the national level to reduce the burden and consequences of metabolic syndrome.

The metabolic syndrome in patients with chronic bronchitis and COPD: frequency and associated consequences for systemic inflammation and physical inactivity.