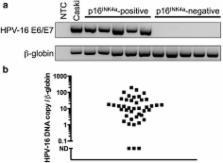 Human papilloma virus-16 (HPV-16) infection is a major risk factor for a subset of head and neck squamous cell carcinoma (HNSCC), in particular oropharyngeal squamous cell carcinoma (OPSCC). Current techniques for assessing the HPV-16 status in HNSCC include the detection of HPV-16 DNA and p16 INK4a expression in tumor tissues. When tumors originate from hidden anatomical sites, this method can be challenging. A non-invasive and cost-effective alternative to biopsy is therefore desirable for HPV-16 detection especially within a community setting to screen at-risk individuals.

We demonstrate that the detection of HPV-16 DNA in salivary oral rinse is indicative of HPV status in HNSCC patients and can potentially be used as a diagnostic tool in addition to the current methods.

Primer-directed enzymatic amplification of DNA with a thermostable DNA polymerase.

K B Mullis,  S Stoffel,  S Scharf … (1988)
A thermostable DNA polymerase was used in an in vitro DNA amplification procedure, the polymerase chain reaction. The enzyme, isolated from Thermus aquaticus, greatly simplifies the procedure and, by enabling the amplification reaction to be performed at higher temperatures, significantly improves the specificity, yield, sensitivity, and length of products that can be amplified. Single-copy genomic sequences were amplified by a factor of more than 10 million with very high specificity, and DNA segments up to 2000 base pairs were readily amplified. In addition, the method was used to amplify and detect a target DNA molecule present only once in a sample of 10(5) cells.

Prevalence and physical status of human papillomavirus in squamous cell carcinomas of the head and neck.

Antti Vaheri,  Calvin R Chen,  Riitta Suuronen … (2003)
Fresh-frozen biopsies were obtained from 61 patients at diagnosis of squamous cell carcinoma of the head and neck (HNSCC) for study of the prevalence and physical status of human papillomavirus (HPV) DNA. The frequency of HPV DNA and genotypes were determined by SPF10 PCR screening with a general probe hybridization and INNO-LiPA HPV genotyping assay. In addition, a single-phase PCR with primers FAP 59/64 and a nested PCR with primers CP 65/70 and CP 66/69 served to detect particularly cutaneous HPV types. By the sensitive SPF10 PCR and INNO-LiPA assay, 37 of 61 (61%) samples were positive for HPV. HPV-16 was the most frequently detected type (31 of 37, 84%). Multiple infections were found in 8 of 37 (22%) of the HPV-positive samples, and co-infection by HPV-16 and HPV-33 was predominant. No cutaneous HPV types were detected. Patients with HPV-positive tumors had similar prognosis as those with HPV-negative ones. Real-time PCR analysis of the HPV-16 positive samples indicated the presence of integrated (11 of 23, 48%), episomal (8 of 23, 35%) and mixed forms (4 of 23, 17%) of HPV DNA. The viral load of HPV DNA exhibited large variation. The median copy numbers of E6 DNA in tonsillar specimens were approximately 80,000 times higher than that in nontonsillar HNSCC ones. Patients with episomal viral DNA were more frequently found to have large (T3-T4) tumors at diagnosis than were those with integrated or mixed forms. Copyright 2003 Wiley-Liss, Inc.

Gerhard Dyckhoff,  Dana Holzinger,  F Bosch … (2012)
Oropharyngeal squamous cell carcinomas (OPSCC) that are associated with human papilloma virus (HPV) infection carry a more favorable prognosis than those that are HPV-negative. However, it remains unclear which biomarker(s) can reliably determine which OPSCC specimens are truly driven by HPV infection. In this study, we analyzed 199 fresh-frozen OPSCC specimens for HPV DNA, viral load, RNA expression patterns typical for cervical carcinomas (CxCaRNA(+)), and the HPV-targeted tumor suppressor protein p16(INK4a) as markers for HPV infection. In this set of specimens, there was a 49% prevalence of DNA for the cancer-associated HPV type 16 (HPV(+)). However, there was only a 16% prevalence of high viral load and only a 20% prevalence of CxCaRNA(+), a marker of HPV16 carcinogenic activity. Among the CxCaRNA(+) tumors, 78% of the specimens exhibited overexpression of p16(INK4a), which also occurred in 14% of the HPV-negative tumors. Using a multivariate survival analysis with HPV negativity as the reference group, CxCaRNA(+) as a single marker conferred the lowest risk of death [HR = 0.28, 95% confidence interval (CI), 0.13-0.61] from oropharyngeal cancer, closely followed by high viral load (HR = 0.32, 95% CI, 0.14-0.73). In contrast, a weaker inverse association was found for OPSCC that were HPV(+) and p16(INK4a) high (HR = 0.55, 95% CI, 0.29-1.08). In summary, our findings argued that viral load or RNA pattern analysis is better suited than p16(INK4a) expression to identify HPV16-driven tumors in OPSCC patient populations. ©2012 AACR.