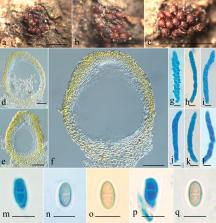 To investigate fungi from the Qilian Mountains in Gansu Province, ascomycetous specimens were collected and hypocrealean fungi were examined. Eighteen species belonging to six genera in the families Hypocreaceae and Nectriaceae were identified, including 11 species of Hypomyces and Trichoderma in Hypocreaceae and seven species of Nectria , Stylonectria , Thelonectria , and Thyronectria in Nectriaceae . Among them, Stylonectria qilianshanensis and Trichoderma gansuanum are new to science. DNA sequence analyses of combined ACL1, ITS, RPB2, and TEF1 regions confirmed their taxonomic placements. Morphological distinctions between the new species and their close relatives are discussed. Hypomyces tremellicola is reported for the first time in China.

Can three incongruence tests predict when data should be combined?