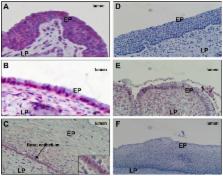 The mechanisms by which human immunodeficiency virus type 1 (HIV-1) crosses mucosal surfaces to establish infection are unknown. Acidic genital secretions of HIV-1-infected women contain HIV-1 likely coated by antibody. We found that the combination of acidic pH and Env-specific IgG, including that from cervicovaginal and seminal fluids of HIV-1-infected individuals, augmented transcytosis across epithelial cells as much as 20-fold compared with Env-specific IgG at neutral pH or non-specific IgG at either pH. Enhanced transcytosis was observed with clinical HIV-1 isolates, including transmitted/founder strains, and was eliminated in Fc neonatal receptor (FcRn)-knockdown epithelial cells. Non-neutralizing antibodies allowed similar or less transcytosis than neutralizing antibodies. However, the ratio of total:infectious virus was higher for neutralizing antibodies, indicating that they allowed transcytosis while blocking infectivity of transcytosed virus. Immunocytochemistry revealed abundant FcRn expression in columnar epithelia lining the human endocervix and penile urethra. Acidity and Env-specific IgG enhance transcytosis of virus across epithelial cells via FcRn and could facilitate translocation of virus to susceptible target cells following sexual exposure.

HIV-1 causes a sexually transmitted disease. However, the mechanisms employed by the virus to cross genital tract tissue and establish infection are uncertain. Since cervicovaginal fluid is acidic and HIV-1 in cervicovaginal fluid is likely coated with antibodies, we explored the effect of low pH and HIV-1-specific antibodies on transcytosis, the movement of HIV-1 across tight-junctioned epithelial cells. We found that the combination of HIV-1-specific antibodies and low pH enhanced transcytosis as much as 20-fold. Virus that underwent transcytosis under these conditions was infectious, and infectivity was highly influenced by whether or not the antibody neutralized the virus. We observed enhanced transcytosis using antibody from cervicovaginal and seminal fluids and using transmitted/founder strains of HIV-1. We also found that the enhanced transcytosis was due to the Fc neonatal receptor (FcRn), which binds immune complexes at acidic pH and releases them at neutral pH. Finally, staining of human tissue revealed abundant FcRn expression on columnar epithelial cells of penile urethra and endocervix. Our findings reveal a novel mechanism wherein HIV-1 may facilitate its own transmission by usurping the antibody response directed against itself. These results have important implications for HIV vaccine development and for understanding the earliest events in HIV transmission.

The role of sexually transmitted diseases in HIV transmission.

R Galvin,  Myron S Cohen (2003)
More than 42 million people worldwide are now infected with HIV, in spite of sustained prevention activities. Although the spread of HIV has been primarily sexual, epidemiological studies have indicated that the efficiency of the spread of HIV is poor, perhaps as infrequently as 1 in every 1,000 episodes of sexual intercourse. However, sexually transmitted diseases (STDs) that cause ulcers or inflammation greatly increase the efficiency of HIV transmission--by increasing both the infectiousness of, and the susceptibility to HIV infection. STDs might be particularly important in the early stages of a localized HIV epidemic, when people with risky sexual behaviour are most likely to become infected. In China, eastern Europe and Russia, there has been a remarkable increase in the incidence of STDs in recent years, and this is reflected in the rapid increase in the spread of HIV in these areas. Targeted STD detection and treatment should have a central role in HIV prevention in these emerging epidemics.

Derek Owen,  David F. Katz (1999)
A fluid medium was developed to simulate the fluid produced in the human vagina. The composition of the medium was based on an extensive review of the literature on constituents of human vaginal secretions. In choosing the ingredients for this medium, the goal was to emphasize properties that influence interactions of vaginal fluid with topical contraceptive, prophylactic, or therapeutic products. Among these properties, pH and osmolarity play a dominant role in physicochemical processes that govern drug release and distribution.

Davide Corti serves as Senior Vice President and Antonio Lanzavecchia is a scientific advisor for HUMABS BioMed SA. This does not alter our adherence to all PLOS Pathogens policies on sharing data and materials.

Research reported in this publication was supported by the National Institute of Allergy and Infectious Diseases of the National Institutes of Health under Award Numbers R01AI102715 (DNF) and U19 AI096398 (DJA). The funders had no role in study design, data collection and analysis, decision to publish, or preparation of the manuscript.