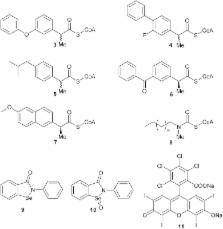 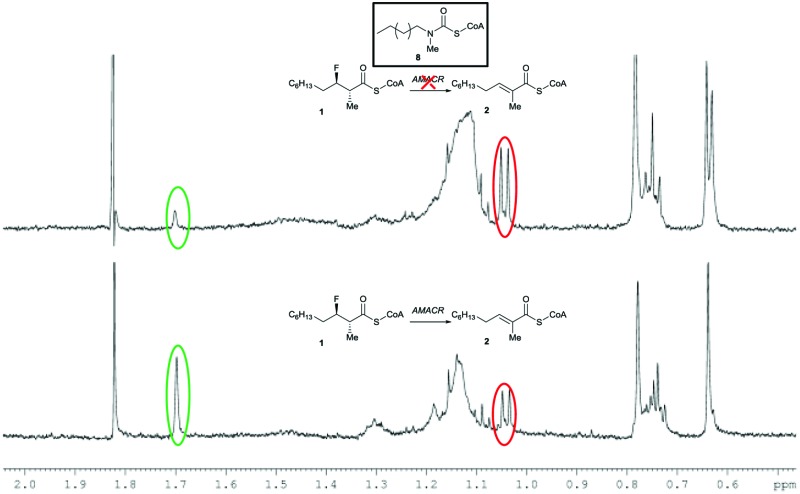 The elimination of fluoride from 3-fluoro-2-methylacyl-CoA substrates by α-methylacyl-CoA racemase (AMACR 1A; P504S) was investigated as a method for determining enzyme activity and inhibitor potency.

α-Methylacyl-CoA racemase (AMACR; P504S) catalyses a key step in the degradation of branched-chain fatty acids and is important for the pharmacological activation of Ibuprofen and related drugs. Levels of AMACR are increased in prostate and other cancers, and it is a drug target. Development of AMACR as a drug target is hampered by lack of a convenient assay. AMACR irreversibly catalyses the elimination of HF from 3-fluoro-2-methylacyl-CoA substrates, and this reaction was investigated for use as an assay. Several known inhibitors and alternative substrates reduced conversion of 3-fluoro-2-methyldecanoyl-CoA by AMACR, as determined by 1H NMR. The greatest reduction of activity was observed with known potent inhibitors. A series of novel acyl-CoA esters with aromatic side chains were synthesised for testing as chromophoric substrates. These acyl-CoA esters were converted to unsaturated products by AMACR, but their use was limited by non-enzymatic elimination. Fluoride sensors were also investigated as a method of quantifying released fluoride and thus AMACR activity. These sensors generally suffered from high background signal and lacked reproducibility under the assay conditions. In summary, the elimination reaction can be used to characterise inhibitors, but it was not possible to develop a convenient colorimetric or fluorescent assay using 3-fluoro-2-methylacyl-CoA substrates.

Emilie L M Ruiter,  Michael L. Hicks,  Sacha Ferdinandusse … (2002)
Identification of genes that are dysregulated in association with prostate carcinogenesis can provide disease markers and clues relevant to disease etiology. Of particular interest as candidate markers of disease are those genes that are frequently overexpressed. In this study, we describe a gene, alpha-methylacyl-CoA racemase (AMACR), whose expression is consistently up-regulated in prostate cancer. Analysis of mRNA levels of AMACR revealed an average up-regulation of approximately 9 fold in clinical prostate cancer specimens compared with normal. Western blot and immunohistochemical analysis confirms the up-regulation at the protein level and localizes the enzyme predominantly to the peroxisomal compartment of prostate cancer cells. A detailed immunohistochemical analysis of samples from 168 primary prostate cancer cases using both standard slides and tissue microarrays demonstrates that both prostate carcinomas and the presumed precursor lesion (high-grade prostatic intraepithelial neoplasia) consistently scored significantly higher than matched normal prostate epithelium; 88% of the carcinomas had a staining score higher than the highest score observed for any sample of normal prostate epithelium. Both untreated metastases (n = 32 patients) and hormone refractory prostate cancers (n = 14 patients) were generally strongly positive for AMACR. To extend the utility of this marker for prostate cancer diagnosis, we combined staining for cytoplasmic AMACR with staining for the nuclear protein, p63, a basal cell marker in the prostate that is absent in prostate cancer. In a simple assay that can be useful for the diagnosis of prostate cancer on both biopsy and surgical specimens, combined staining for p63 and AMACR resulted in a staining pattern that greatly facilitated the identification of malignant prostate cells. The enzyme encoded by the AMACR gene plays a critical role in peroxisomal beta oxidation of branched chain fatty acid molecules. These observations could have important epidemiological and preventive implications for prostate cancer, as the main sources of branched chain fatty acids are dairy products and beef, the consumption of which has been associated with an increased risk for prostate cancer in multiple studies. On the basis of its consistency and magnitude of cancer cell-specific expression, we propose AMACR as an important new marker of prostate cancer and that its use in combination with p63 staining will form the basis for an improved staining method for the identification of prostate carcinomas. Furthermore, the absence of AMACR staining in the vast majority of normal tissues coupled with its enzymatic activity makes AMACR the ideal candidate for development of molecular probes for the noninvasive identification of prostate cancer by imaging modalities.