The genomic basis of adaptive evolution in threespine sticklebacks 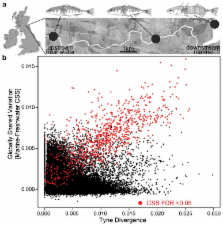 Marine stickleback fish have colonized and adapted to innumerable streams and lakes formed since the last ice age, providing an exceptional opportunity to characterize genomic mechanisms underlying repeated ecological adaptation in nature. Here we develop a high quality reference genome assembly for threespine sticklebacks. By sequencing the genomes of 20 additional individuals from a global set of marine and freshwater populations, we identify a genome-wide set of loci that are consistently associated with marine-freshwater divergence. Our results suggest that reuse of globally-shared standing genetic variation, including chromosomal inversions, plays an important role in repeated evolution of distinct marine and freshwater sticklebacks, and in the maintenance of divergent ecotypes during early stages of reproductive isolation. Both coding and regulatory changes occur in the set of loci underlying marine-freshwater evolution, with regulatory changes likely predominating in this classic example of repeated adaptive evolution in nature.

Mark A. Dickson,  Raju S V Balabhadra,  Pamela Colosimo … (2005)
Major phenotypic changes evolve in parallel in nature by molecular mechanisms that are largely unknown. Here, we use positional cloning methods to identify the major chromosome locus controlling armor plate patterning in wild threespine sticklebacks. Mapping, sequencing, and transgenic studies show that the Ectodysplasin (EDA) signaling pathway plays a key role in evolutionary change in natural populations and that parallel evolution of stickleback low-plated phenotypes at most freshwater locations around the world has occurred by repeated selection of Eda alleles derived from an ancestral low-plated haplotype that first appeared more than two million years ago. Members of this clade of low-plated alleles are present at low frequencies in marine fish, which suggests that standing genetic variation can provide a molecular basis for rapid, parallel evolution of dramatic phenotypic change in nature.

Mark Kirkpatrick,  Nick Barton (2006)
We study the evolution of inversions that capture locally adapted alleles when two populations are exchanging migrants or hybridizing. By suppressing recombination between the loci, a new inversion can spread. Neither drift nor coadaptation between the alleles (epistasis) is needed, so this local adaptation mechanism may apply to a broader range of genetic and demographic situations than alternative hypotheses that have been widely discussed. The mechanism can explain many features observed in inversion systems. It will drive an inversion to high frequency if there is no countervailing force, which could explain fixed differences observed between populations and species. An inversion can be stabilized at an intermediate frequency if it also happens to capture one or more deleterious recessive mutations, which could explain polymorphisms that are common in some species. This polymorphism can cycle in frequency with the changing selective advantage of the locally favored alleles. The mechanism can establish underdominant inversions that decrease heterokaryotype fitness by several percent if the cause of fitness loss is structural, while if the cause is genic there is no limit to the strength of underdominance that can result. The mechanism is expected to cause loci responsible for adaptive species-specific differences to map to inversions, as seen in recent QTL studies. We discuss data that support the hypothesis, review other mechanisms for inversion evolution, and suggest possible tests.

Sigbjørn Lien,  Bård Karlsen,  Trine B Rounge … (2011)
Atlantic cod (Gadus morhua) is a large, cold-adapted teleost that sustains long-standing commercial fisheries and incipient aquaculture. Here we present the genome sequence of Atlantic cod, showing evidence for complex thermal adaptations in its haemoglobin gene cluster and an unusual immune architecture compared to other sequenced vertebrates. The genome assembly was obtained exclusively by 454 sequencing of shotgun and paired-end libraries, and automated annotation identified 22,154 genes. The major histocompatibility complex (MHC) II is a conserved feature of the adaptive immune system of jawed vertebrates, but we show that Atlantic cod has lost the genes for MHC II, CD4 and invariant chain (Ii) that are essential for the function of this pathway. Nevertheless, Atlantic cod is not exceptionally susceptible to disease under natural conditions. We find a highly expanded number of MHC I genes and a unique composition of its Toll-like receptor (TLR) families. This indicates how the Atlantic cod immune system has evolved compensatory mechanisms in both adaptive and innate immunity in the absence of MHC II. These observations affect fundamental assumptions about the evolution of the adaptive immune system and its components in vertebrates.

these authors contributed equally to this work