Antibiotic Resistance Is Prevalent in an Isolated Cave Microbiome 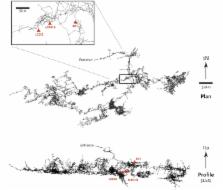 Antibiotic resistance is a global challenge that impacts all pharmaceutically used antibiotics. The origin of the genes associated with this resistance is of significant importance to our understanding of the evolution and dissemination of antibiotic resistance in pathogens. A growing body of evidence implicates environmental organisms as reservoirs of these resistance genes; however, the role of anthropogenic use of antibiotics in the emergence of these genes is controversial. We report a screen of a sample of the culturable microbiome of Lechuguilla Cave, New Mexico, in a region of the cave that has been isolated for over 4 million years. We report that, like surface microbes, these bacteria were highly resistant to antibiotics; some strains were resistant to 14 different commercially available antibiotics. Resistance was detected to a wide range of structurally different antibiotics including daptomycin, an antibiotic of last resort in the treatment of drug resistant Gram-positive pathogens. Enzyme-mediated mechanisms of resistance were also discovered for natural and semi-synthetic macrolide antibiotics via glycosylation and through a kinase-mediated phosphorylation mechanism. Sequencing of the genome of one of the resistant bacteria identified a macrolide kinase encoding gene and characterization of its product revealed it to be related to a known family of kinases circulating in modern drug resistant pathogens. The implications of this study are significant to our understanding of the prevalence of resistance, even in microbiomes isolated from human use of antibiotics. This supports a growing understanding that antibiotic resistance is natural, ancient, and hard wired in the microbial pangenome.

D. Wright,  E. W. Hughes,  Katherine McGrann … (2006)
Microbial resistance to antibiotics currently spans all known classes of natural and synthetic compounds. It has not only hindered our treatment of infections but also dramatically reshaped drug discovery, yet its origins have not been systematically studied. Soil-dwelling bacteria produce and encounter a myriad of antibiotics, evolving corresponding sensing and evading strategies. They are a reservoir of resistance determinants that can be mobilized into the microbial community. Study of this reservoir could provide an early warning system for future clinically relevant antibiotic resistance mechanisms.

The antibiotic resistome: the nexus of chemical and genetic diversity.

Gerard D. Wright (2007)
Over the millennia, microorganisms have evolved evasion strategies to overcome a myriad of chemical and environmental challenges, including antimicrobial drugs. Even before the first clinical use of antibiotics more than 60 years ago, resistant organisms had been isolated. Moreover, the potential problem of the widespread distribution of antibiotic resistant bacteria was recognized by scientists and healthcare specialists from the initial use of these drugs. Why is resistance inevitable and where does it come from? Understanding the molecular diversity that underlies resistance will inform our use of these drugs and guide efforts to develop new efficacious antibiotics.

Mechanisms of resistance to macrolides and lincosamides: nature of the resistance elements and their clinical implications.

Roland Leclercq (2002)
Resistance to macrolides and lincosamides is increasingly reported in clinical isolates of gram-positive bacteria. The multiplicity of mechanisms of resistance, which include ribosomal modification, efflux of the antibiotic, and drug inactivation, results in a variety of phenotypes of resistance. There is controversy concerning the clinical relevance of in vitro macrolide resistance. Recent data, however, have shown that eradication of bacteria correlates with clinical outcome of acute otitis media in children and that macrolide therapy results in delayed eradication of macrolide-resistant pneumococci. These results support the need for in vitro detection of macrolide resistance and correct interpretation of susceptibility tests to guide therapy.

Publisher ID: PONE-D-11-25105
DOI: 10.1371/journal.pone.0034953
PMC ID: 3324550
PubMed ID: 22509370
Copyright statement: Bhullar et al. This is an open-access article distributed under the terms of the Creative Commons Attribution License, which permits unrestricted use, distribution, and reproduction in any medium, provided the original author and source are credited.