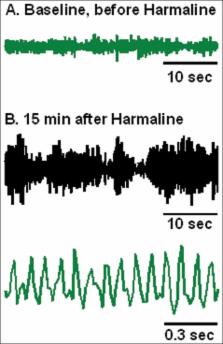 Journal: Tremor and Other Hyperkinetic Movements

Harmaline and harmine are tremorigenic β-carbolines that, on administration to experimental animals, induce an acute postural and kinetic tremor of axial and truncal musculature. This drug-induced action tremor has been proposed as a model of essential tremor. Here we review what is known about harmaline tremor.

Using the terms harmaline and harmine on PubMed, we searched for papers describing the effects of these β-carbolines on mammalian tissue, animals, or humans.

Investigations over four decades have shown that harmaline induces rhythmic burst-firing activity in the medial and dorsal accessory inferior olivary nuclei that is transmitted via climbing fibers to Purkinje cells and to the deep cerebellar nuclei, then to brainstem and spinal cord motoneurons. The critical structures required for tremor expression are the inferior olive, climbing fibers, and the deep cerebellar nuclei; Purkinje cells are not required. Enhanced synaptic norepinephrine or blockade of ionic glutamate receptors suppresses tremor, whereas enhanced synaptic serotonin exacerbates tremor. Benzodiazepines and muscimol suppress tremor. Alcohol suppresses harmaline tremor but exacerbates harmaline-associated neural damage. Recent investigations on the mechanism of harmaline tremor have focused on the T-type calcium channel.

Oscillatory properties of guinea-pig inferior olivary neurones and their pharmacological modulation: an in vitro study.

Yosef Yarom,  R Llinás (1986)
The oscillatory properties of the membrane potential in inferior olivary neurones were studied in guinea-pig brain-stem slices maintained in vitro. Intracellular double-ramp current injection at frequencies of 1-20 Hz revealed that inferior olivary neurones tend to fire at two preferred frequencies: 3-6 Hz when the cells were actively depolarized (resting potential less than -50 mV), and 9-12 Hz when they were actively hyperpolarized (resting potential more than -75 mV). In 10% of the experiments spontaneous subthreshold oscillations of the membrane potential were observed. These oscillations, which resembled sinusoidal wave forms and had a frequency of 4-6 Hz and an amplitude of 5-10 mV, occurred synchronously in all cells tested within the slice. These oscillations persisted in the presence of 10(-4) M-tetrodotoxin and were blocked by Ca2+ conductance blockers or by the removal of Ca2+ from the bathing solution. The oscillations were affected by gross extracellular stimulation of the slice but not by intracellular activation of any given neurone. The data indicate that these oscillations reflect the properties of neuronal ensembles comprised of a large number of coupled elements. Similar ensemble oscillation could be induced, in most experiments, by adding harmaline (0.1 mg/ml) and serotonin (10(-4) M) to the bath and could be blocked by bath addition of noradrenaline. Harmaline was found to increase cell excitability by hyperpolarizing the neurones and shifting the inactivation curve for the somatic Ca2+ spike to a more positive membrane potential level. The role inferior olivary oscillations play in the organization of motor coordination is discussed.

Yosef Yarom,  R Llinás (1981)
The electrophysiological properties of guinea-pig inferior olivary (I.O.) cells have been studied in an in vitro brain stem slice preparation. 1. Intracellular recordings from 185 neurones in this nucleus reveal that antidromic, orthodromic or direct stimulation generates action potentials consisting of a fast spike followed by an after-depolarizing potential (ADP). The ADP had an amplitude of 49 +/- 8 mV (mean +/- S.D.) and a duration which varied over a wide range with the level of depolarization. This ADP is followed by an after-hyperpolarizing potential (AHP) having an amplitude of 12 +/- 3 mV (mean +/- S.D.) from rest and lasting up to 250 msec. The AHP shows a rebound depolarization wave. 2. Synaptic activation may be obtained by peri-olivary stimulation with a bipolar electrode located in the immediate vicinity of the I.O. nucleus. These potentials are a mixture of depolarizing and hyperpolarizing synaptic events which can be reversed by direct membrane polarization. 3. Addition of tetrodotoxin (TTX) to the bath, or removal of extracellular Na, abolishes the fast initial action potential but does not modify the ADP or the AHP. Blockage of Ca conductance by Co, Mn, Cd or D600, or replacement of Ca by Mg, abolishes the ADP--AHP sequence. 4. Hyperpolarization of the neurone uncovers a low-threshold Ca conductance which is inactivated at rest and has similar pharmacological properties to the ADP. This low-threshold spike plays a central role in the rebound potential following the AHP. 5. Simultaneous impalement of I.O. neurone pairs demonstrated the presence of electrotonic coupling between neurones, which is especially prominent in the medial accessory olive.

*To whom correspondence should be addressed. E-mail: charles.handforth@ 123456va.gov

This is an open-access article distributed under the terms of the Creative Commons Attribution–Noncommerical–No Derivatives License, which permits the user to copy, distribute, and transmit the work provided that the original author and source are credited; that no commercial use is made of the work; and that the work is not altered or transformed.