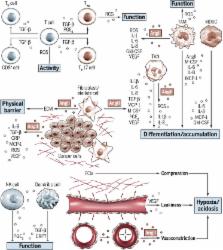 Renin-angiotensin system (RAS) inhibitors (RASi)—widely prescribed for the treatment of cardiovascular diseases— have considerable potential in oncology. The RAS plays a crucial role in cancer biology and affects tumor growth and dissemination directly and indirectly by remodeling the tumor microenvironment. We review clinical data on the benefit of RASi in primary and metastatic tumors and propose that, by activating immunostimulatory pathways, these inhibitors can enhance immunotherapy of cancer.

Rakesh Jain (2013)
For almost four decades, my work has focused on one challenge: improving the delivery and efficacy of anticancer therapeutics. Working on the hypothesis that the abnormal tumor microenvironment-characterized by hypoxia and high interstitial fluid pressure--fuels tumor progression and treatment resistance, we developed an array of sophisticated imaging technologies and animal models as well as mathematic models to unravel the complex biology of tumors. Using these tools, we demonstrated that the blood and lymphatic vasculature, fibroblasts, immune cells, and extracellular matrix associated with tumors are abnormal, which together create a hostile tumor microenvironment. We next hypothesized that agents that induce normalization of the microenvironment can improve treatment outcome. Indeed, we demonstrated that judicious use of antiangiogenic agents--originally designed to starve tumors--could transiently normalize tumor vasculature, alleviate hypoxia, increase delivery of drugs and antitumor immune cells, and improve the outcome of various therapies. Our trials of antiangiogenics in patients with newly diagnosed and recurrent glioblastoma supported this concept. They revealed that patients whose tumor blood perfusion increased in response to cediranib survived 6 to 9 months longer than those whose blood perfusion did not increase. The normalization hypothesis also opened doors to treating various nonmalignant diseases characterized by abnormal vasculature, such as neurofibromatosis type 2. More recently, we discovered that antifibrosis drugs capable of normalizing the tumor microenvironment can improve the delivery and efficacy of nano- and molecular medicines. Our current efforts are directed at identifying predictive biomarkers and more-effective strategies to normalize the tumor microenvironment for enhancing anticancer therapies.

The intrarenal renin-angiotensin system: from physiology to the pathobiology of hypertension and kidney disease.

Akira Nishiyama,  Masaomi Nangaku,  Hiroyuki Kobori … (2007)
In recent years, the focus of interest on the role of the renin-angiotensin system (RAS) in the pathophysiology of hypertension and organ injury has changed to a major emphasis on the role of the local RAS in specific tissues. In the kidney, all of the RAS components are present and intrarenal angiotensin II (Ang II) is formed by independent multiple mechanisms. Proximal tubular angiotensinogen, collecting duct renin, and tubular angiotensin II type 1 (AT1) receptors are positively augmented by intrarenal Ang II. In addition to the classic RAS pathways, prorenin receptors and chymase are also involved in local Ang II formation in the kidney. Moreover, circulating Ang II is actively internalized into proximal tubular cells by AT1 receptor-dependent mechanisms. Consequently, Ang II is compartmentalized in the renal interstitial fluid and the proximal tubular compartments with much higher concentrations than those existing in the circulation. Recent evidence has also revealed that inappropriate activation of the intrarenal RAS is an important contributor to the pathogenesis of hypertension and renal injury. Thus, it is necessary to understand the mechanisms responsible for independent regulation of the intrarenal RAS. In this review, we will briefly summarize our current understanding of independent regulation of the intrarenal RAS and discuss how inappropriate activation of this system contributes to the development and maintenance of hypertension and renal injury. We will also discuss the impact of antihypertensive agents in preventing the progressive increases in the intrarenal RAS during the development of hypertension and renal injury.

Fibroblast heterogeneity in the cancer wound

exclusive licensee American Association for the Advancement of Science. No claim to original U.S. Government Works. Distributed under a Creative Commons Attribution License 4.0 (CC BY).