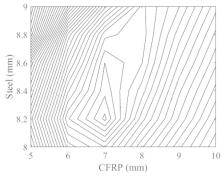 This study presents an explosion-resistant hybrid system containing a steel slab and a carbon fiber-reinforced polymer (CFRP) frame. CFRP, which is a high-strength material, acts as an impact reflection part. Steel slab, which is a high-ductility material, plays a role as an impact energy absorption part. Based on the elastoplastic behavior of steel, a numerical model is proposed to simulate the dynamic responses of the hybrid system under the air pressure from an explosion. Based on this, a case study is conducted to analyze and identify the optimal design of the proposed hybrid system, which is subjected to an impact load condition. The observations from the case study show the optimal thicknesses of 8.2 and 7 mm for a steel slab and a ϕ100 mm CFRP pipe for the hybrid system, respectively. In addition, the ability of the proposed hybrid system to resist an uncertain explosion is demonstrated in the case study based on the reliability methodology.

Hongjun Liang,  Shan Li,  Yiyan Lu … (2018)
Effective bonding between adherents plays a key role in retrofitting concrete structures in civil engineering using fibre-reinforced polymers (FRPs). To ensure structural safety, it is critical to develop design codes, which account for uncertainties of materials, the environment, and load, to estimate bond behaviour under long-term exposure to harsh environments. Therefore, a reliability analysis was performed to study the bond behaviour of FRP–concrete interface under wet–dry cycles and sustained loading. Thirty double-lap, shear-bonded carbon FRP (CFRP)–concrete composite specimens were tested after wet–dry cycles and sustained loading exposure. The fracture energy G f of the bond behavior between CFRP and concrete was directly obtained from the measured local bond-slip curves. Five widely used test methods were adopted to verify the possible distribution types of G f. Based on the best fit distribution of G f, a reliability index β was then calculated for the specimens. The effects of wet–dry exposure and sustained loading on β were analysed separately. The effects of the mean and standard deviation of the load on β were compared. It was found that the mean had a greater impact on reliability than the standard deviation, but neither changed the regulation of the exponential reduction of β with increasing wet–dry cycle time. Their impact was significant for a small number of wet–dry cycles but insignificant for more than 4000 wet–dry cycles.