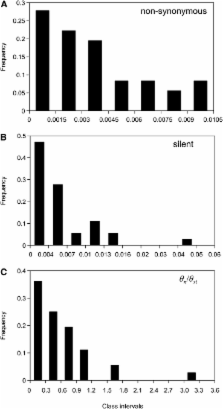 Marine bivalves show among the greatest allozyme diversity ever reported in Eukaryotes, putting them historically at the heart of the neutralist−selectionist controversy on the maintenance of genetic variation. Although it is now acknowledged that this high diversity is most probably a simple consequence of a large population size, convincing support for this explanation would require a rigorous assessment of the silent nucleotide diversity in natural populations of marine bivalves, which has not yet been done. This study investigated DNA sequence polymorphism in a set of 37 nuclear loci in wild samples of the flat oyster Ostrea edulis. Silent diversity was found to be only moderate (0.7%), and there was no departure from demographic equilibrium under the Wright-Fisher model, suggesting that the effective population size might not be as large as might have been expected. In accordance with allozyme heterozygosity, nonsynonymous diversity was comparatively very high (0.3%), so that the nonsynonymous to silent diversity ratio reached a value rarely observed in any other organism. We estimated that one-quarter of amino acid-changing mutations behave as neutral in O. edulis, and as many as one-third are sufficiently weakly selected to segregate at low frequency in the polymorphism. Finally, we inferred that one oyster is expected to carry more than 4800 non-neutral alleles (or 4.2 cM −1). We conclude that a high load of segregating non-neutral amino-acid polymorphisms contributes to high protein diversity in O. edulis. The high fecundity of marine bivalves together with an unpredictable and highly variable success of reproduction and recruitment (sweepstakes reproduction) might produce a greater decoupling between Ne and N than in other organisms with lower fecundities, and we suggest this could explain why a higher segregating load could be maintained for a given silent mutation effective size.

F Tajima (1989)
The relationship between the two estimates of genetic variation at the DNA level, namely the number of segregating sites and the average number of nucleotide differences estimated from pairwise comparison, is investigated. It is found that the correlation between these two estimates is large when the sample size is small, and decreases slowly as the sample size increases. Using the relationship obtained, a statistical method for testing the neutral mutation hypothesis is developed. This method needs only the data of DNA polymorphism, namely the genetic variation within population at the DNA level. A simple method of computer simulation, that was used in order to obtain the distribution of a new statistic developed, is also presented. Applying this statistical method to the five regions of DNA sequences in Drosophila melanogaster, it is found that large insertion/deletion (greater than 100 bp) is deleterious. It is suggested that the natural selection against large insertion/deletion is so weak that a large amount of variation is maintained in a population.

Primer3 on the WWW for general users and for biologist programmers.

Sequence data from this article have been deposited with the GenBank Data Libraries under accession nos. JN680816– JN680855.