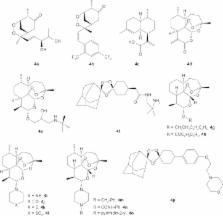 Malaria disease continues to be a major health problem worldwide due to the emergence of multidrug-resistant strains of Plasmodium falciparum. In recent days, artemisinin (ART)-based drugs and combination therapies remain the drugs of choice for resistant P. falciparum malaria. However, resistance to ART-based drugs has begun to appear in some parts of the world. Endoperoxide compounds (natural/semisynthetic/synthetic) representing a huge number of antimalarial agents possess a wide structural diversity with a desired antimalarial effectiveness against resistant P. falciparum malaria. The 1,2,4-trioxane ring system lacking the lactone ring that constitutes the most important endoperoxide structural scaffold is believed to be the key pharmacophoric moiety and is primarily responsible for the pharmacodynamic potential of endoperoxide-based antimalarials. Due to this reason, research into endoperoxide, particularly 1,2,4-trioxane-, 1,2,4-trioxolane- and 1,2,4,5-teraoxane-based scaffolds, has gained significant interest in recent years for developing antimalarial drugs against resistant malaria. In this paper, a comprehensive effort has been made to review the development of endoperoxide antimalarials from traditional antimalarial leads (natural/semisynthetic) and structural diversity of endoperoxide molecules derived from 1,2,4-trioxane-, 1,2,4-trioxolane- and 1,2,4,5-teraoxane-based structural scaffolds, including their chimeric (hybrid) molecules, which are newer and potent antimalarial agents.

Assessment of the pharmacodynamic properties of antimalarial drugs in vivo.

The Molecular Mechanism of Action of Artemisinin—The Debate Continues

Paul M. O’Neill,  Victoria Barton,  Stephen A. Ward … (2010)
Despite international efforts to ‘roll back malaria’ the 2008 World Malaria Report revealed the disease still affects approximately 3 billion people in 109 countries; 45 within the WHO African region. The latest report however does provide some ‘cautious optimism’; more than one third of malarious countries have documented greater than 50% reductions in malaria cases in 2008 compared to 2000. The goal of the Member States at the World Health Assembly and ‘Roll Back Malaria’ (RBM) partnership is to reduce the numbers of malaria cases and deaths recorded in 2000 by 50% or more by the end of 2010. Although malaria is preventable it is most prevalent in poorer countries where prevention is difficult and prophylaxis is generally not an option. The burden of disease has increased by the emergence of multi drug resistant (MDR) parasites which threatens the use of established and cost effective antimalarial agents. After a major change in treatment policies, artemisinins are now the frontline treatment to aid rapid clearance of parasitaemia and quick resolution of symptoms. Since artemisinin and its derivatives are eliminated rapidly, artemisinin combination therapies (ACT’s) are now recommended to delay resistance mechanisms. In spite of these precautionary measures reduced susceptibility of parasites to the artemisinin-based component of ACT’s has developed at the Thai-Cambodian border, a historical ‘hot spot’ for MDR parasite evolution and emergence. This development raises serious concerns for the future of the artemsinins and this is not helped by controversy related to the mode of action. Although a number of potential targets have been proposed the actual mechanism of action remains ambiguous. Interestingly, artemisinins have also shown potent and broad anticancer properties in cell lines and animal models and are becoming established as anti-schistosomal agents. In this review we will discuss the recent evidence explaining bioactivation and potential molecular targets in the chemotherapy of malaria and cancer.

Medical need, scientific opportunity and the drive for antimalarial drugs.

M Ridley (2002)
Continued and sustainable improvements in antimalarial medicines through focused research and development are essential for the world's future ability to treat and control malaria. Unfortunately, malaria is a disease of poverty, and despite a wealth of scientific knowledge there is insufficient market incentive to generate the competitive, business-driven industrial antimalarial drug research and development that is normally needed to deliver new products. Mechanisms of partnering with industry have been established to overcome this obstacle and to open up and build on scientific opportunities for improved chemotherapy in the future.