Outcomes of laparoscopic cholecystectomy in patients with and without COPD 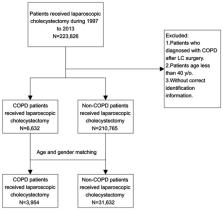 Objective: The aim of this study was to investigate the outcomes of patients with COPD after laparoscopic cholecystectomy (LC).

Patients and methods: All COPD patients who underwent LC from 2000 to 2010 were identified from the Taiwanese National Health Insurance Research Database. The outcomes of hospital stay, intensive care unit (ICU) stay, and use of mechanical ventilation and life support measures in COPD and non-COPD populations were compared.

Results: A total of 3,954 COPD patients who underwent LC were enrolled in our study. There were significant differences in the hospitalization period, ICU stay, and use of mechanical ventilation and life support measures between the COPD and non-COPD populations. The mean hospital stay, ICU stay and number of mechanical ventilation days in the COPD and non-COPD groups were 7.81 vs 6.01 days, 5.5 vs 4.5 days and 6.40 vs 4.74 days, respectively. The use of life support measures, including vasopressors and hemodialysis, and the rates of hospital mortality, acute respiratory failure and pneumonia were also increased in COPD patients compared with those in non-COPD patients.

Conclusion: COPD increased the risk of mortality, lengths of hospital and ICU stays, ventilator days and poor outcomes after LC in this study.

N K Pursnani,  Kishore G Pursnani,  M Calleja … (1998)
Laparoscopic cholecystectomy (LC) has become firmly established as a procedure of choice for gallstone disease. The procedure usually necessitates general anaesthesia and endotracheal intubation to prevent aspiration and respiratory embarrassment secondary to the induction of pneumoperitoneum. There is a paucity of data in the literature on the procedure being performed under regional (epidural) anaesthesia, especially in patients with coexisting pulmonary disease and pregnancy, who are deemed high risk for general anaesthesia. We report our preliminary experience with LC using epidural anaesthesia in patients with chronic obstructive pulmonary disease (COPD). We performed LC in six patients (one man and five women), with a median age of 56 years (range, 38-74), under epidural anaesthesia over an 8-month period. All patients were ASA grade III/IV and the mean FEB1/FVC was 0.52 (range, 0.4-0.68), due to chronic asthma (two cases) and COPD (four cases). They were admitted a day prior to surgery for pulmonary function tests, nebulisers, and chest physiotherapy. An epidural catheter was introduced at T10/11 intervertebral space, and a bolus of 0.5% Bupivacaine was administered. Depending on the patient's pain threshold and the segmental level of analgesia achieved, incremental doses of 2 ml of 0.5% Bupivacaine along with boluses of intravenous 100 mcg Alfentanil was given to each patient. The patients were breathing spontaneously. No nasogastric tube was inserted, and a low-pressure (10 mmHg) pneumoperitoneum was created. LC was performed according to the standard technique. All the patients tolerated the procedure well and made an uneventful postoperative recovery. Median operating time was 50 min; average length of hospital stay was 2.5 days (range, 2-4). The epidural catheter was removed the morning after the operation. Only one patient required postoperative opioid analgesia. Two patients complained of persistent shoulder tip pain during surgery and required intraoperative analgesia (Alfentanil). There was no change in the patient's cardiorespiratory status, including PO2 and pCO2, and no complications occurred either intra- or postoperatively. LC can be performed safely under epidural anaesthesia in patients with severe COPD. Intraoperative shoulder tip or abdominal pain does not seem to be a major deterrent and can be effectively controlled with small doses of opioid analgesia.

R Sandler,  S. Zacks,  R. M. Brown … (2002)
Laparoscopic cholecystectomy (LC) has become a popular alternative to open cholecystectomy (OC). Previous studies comparing outcomes in LC and OC used small selected cohorts of patients and did not control for comorbid conditions that might affect outcome. The aims of this study were to characterize the morbidity, mortality, and costs of LC and OC in a large unselected cohort of patients. We used the population-based North Carolina Discharge Abstract Database (NCHDAD) for January 1, 1991, to September 30, 1994 (n = 850,000) to identify patients undergoing OC and LC. We identified the indications for surgery, complications, and type of perioperative biliary imaging used. We compared length of stay, hospital charges, complications, morbidity, and mortality between OC and LC patients. To account for variations in outcomes from differences in age and comorbidity between the OC and LC groups, we used the age-adjusted Charlson Comorbidity Index in regression analyses quantifying the association between type of surgery and outcome. Our cohort consisted of 43,433 patients (19,662 LC and 23,771 OC). The mean age-adjusted Charlson Comorbidity Index score was slightly higher for the OC compared to the LC group (4.3 vs 4.1, p < 0.05). The OC patients had longer hospitalizations, generated more charges ($12,125 vs $9,139, p < 0.05), and required home care more often. The crude risk ratio comparing risk of death in OC to LC was 5.0 (95% CI = 3.9-6.5). After controlling for age, comorbidity, and sex, the odds of dying in the OC group was still 3.3 times (95% CI = 1.4-7.3) greater than in the LC group. In the LC group, the number of patients with acute cholecystitis rose over the study period, whereas the number of patients with chronic cholecystitis declined. In the OC group, the number of patients with acute and chronic cholecystitis declined. The use of intraoperative cholangiography was greater in the OC group but declined in both groups over the study period. The use of ERCP was greater in the LC group and increased in both groups over time. The introduction of LC has resulted in a change in the management of cholecystitis. Despite a higher proportion of patients with acute cholecystitis, the risk of dying was significantly less in LC than in OC patients, even after controlling for age and comorbidity. Based on lower costs and better outcomes, LC seems to be the treatment of choice for acute and chronic cholecystitis.