Walking, Cycling and Driving to Work in the English and Welsh 2011 Census: Trends, Socio-Economic Patterning and Relevance to Travel Behaviour in General 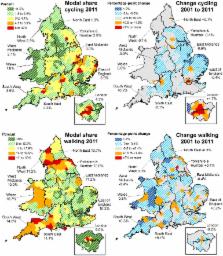 Increasing walking and cycling, and reducing motorised transport, are health and environmental priorities. This paper examines levels and trends in the use of different commute modes in England and Wales, both overall and with respect to small-area deprivation. It also investigates whether commute modal share can serve as a proxy for travel behaviour more generally.

23.7 million adult commuters reported their usual main mode of travelling to work in the 2011 census in England and Wales; similar data were available for 1971–2001. Indices of Multiple Deprivation were used to characterise socio-economic patterning. The National Travel Survey (2002–2010) was used to examine correlations between commute modal share and modal share of total travel time. These correlations were calculated across 150 non-overlapping populations defined by region, year band and income.

Among commuters in 2011, 67.1% used private motorised transport as their usual main commute mode (−1.8 percentage-point change since 2001); 17.8% used public transport (+1.8% change); 10.9% walked (−0.1% change); and 3.1% cycled (+0.1% change). Walking and, to a marginal extent, cycling were more common among those from deprived areas, but these gradients had flattened over the previous decade to the point of having essentially disappeared for cycling. In the National Travel Survey, commute modal share and total modal share were reasonably highly correlated for private motorised transport (r = 0.94), public transport (r = 0.96), walking (r = 0.88 excluding London) and cycling (r = 0.77).

England and Wales remain car-dependent, but the trends are slightly more encouraging. Unlike many health behaviours, it is more common for socio-economically disadvantaged groups to commute using physically active modes. This association is, however, weakening and may soon reverse for cycling. At a population level, commute modal share provides a reasonable proxy for broader travel patterns, enhancing the value of the census in characterising background trends and evaluating interventions.

Association of socioeconomic position with health behaviors and mortality.

Silvia Stringhini,  Archana Singh-Manoux,  Mika Kivimaki (2010)
Previous studies may have underestimated the contribution of health behaviors to social inequalities in mortality because health behaviors were assessed only at the baseline of the study. To examine the role of health behaviors in the association between socioeconomic position and mortality and compare whether their contribution differs when assessed at only 1 point in time with that assessed longitudinally through the follow-up period. Established in 1985, the British Whitehall II longitudinal cohort study includes 10 308 civil servants, aged 35 to 55 years, living in London, England. Analyses are based on 9590 men and women followed up for mortality until April 30, 2009. Socioeconomic position was derived from civil service employment grade (high, intermediate, and low) at baseline. Smoking, alcohol consumption, diet, and physical activity were assessed 4 times during the follow-up period. All-cause and cause-specific mortality. A total of 654 participants died during the follow-up period. In the analyses adjusted for sex and year of birth, those with the lowest socioeconomic position had 1.60 times higher risk of death from all causes than those with the highest socioeconomic position (a rate difference of 1.94/1000 person-years). This association was attenuated by 42% (95% confidence interval [CI], 21%-94%) when health behaviors assessed at baseline were entered into the model and by 72% (95% CI, 42%-154%) when they were entered as time-dependent covariates. The corresponding attenuations were 29% (95% CI, 11%-54%) and 45% (95% CI, 24%-79%) for cardiovascular mortality and 61% (95% CI, 16%-425%) and 94% (95% CI, 35%-595%) for noncancer and noncardiovascular mortality. The difference between the baseline only and repeated assessments of health behaviors was mostly due to an increased explanatory power of diet (from 7% to 17% for all-cause mortality, respectively), physical activity (from 5% to 21% for all-cause mortality), and alcohol consumption (from 3% to 12% for all-cause mortality). The role of smoking, the strongest mediator in these analyses, did not change when using baseline or repeat assessments (from 32% to 35% for all-cause mortality). In a civil service population in London, England, there was an association between socioeconomic position and mortality that was substantially accounted for by adjustment for health behaviors, particularly when the behaviors were assessed repeatedly.

James Woodcock,  Phil Edwards,  Cathryn Tonne … (2009)
We used Comparative Risk Assessment methods to estimate the health effects of alternative urban land transport scenarios for two settings-London, UK, and Delhi, India. For each setting, we compared a business-as-usual 2030 projection (without policies for reduction of greenhouse gases) with alternative scenarios-lower-carbon-emission motor vehicles, increased active travel, and a combination of the two. We developed separate models that linked transport scenarios with physical activity, air pollution, and risk of road traffic injury. In both cities, we noted that reduction in carbon dioxide emissions through an increase in active travel and less use of motor vehicles had larger health benefits per million population (7332 disability-adjusted life-years [DALYs] in London, and 12 516 in Delhi in 1 year) than from the increased use of lower-emission motor vehicles (160 DALYs in London, and 1696 in Delhi). However, combination of active travel and lower-emission motor vehicles would give the largest benefits (7439 DALYs in London, 12 995 in Delhi), notably from a reduction in the number of years of life lost from ischaemic heart disease (10-19% in London, 11-25% in Delhi). Although uncertainties remain, climate change mitigation in transport should benefit public health substantially. Policies to increase the acceptability, appeal, and safety of active urban travel, and discourage travel in private motor vehicles would provide larger health benefits than would policies that focus solely on lower-emission motor vehicles.

Competing Interests: The author has declared that no competing interests exist.

AG is funded by a National Institute of Health Research (NIHR) post-doctoral fellowship. The funders had no role in study design, data collection and analysis, decision to publish, or preparation of the manuscript. The views and opinions expressed in this article are those of the author and do not necessarily reflect those of the NIHR, the Department of Health or the NHS.