Expression of Kir4.1 and Kir5.1 inwardly rectifying potassium channels in oligodendrocytes, the myelinating cells of the CNS 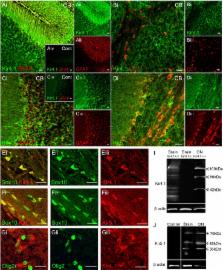 The inwardly rectifying K + channel subtype Kir5.1 is only functional as a heteromeric channel with Kir4.1. In the CNS, Kir4.1 is localised to astrocytes and is the molecular basis of their strongly negative membrane potential. Oligodendrocytes are the specialised myelinating glia of the CNS and their resting membrane potential provides the driving force for ion and water transport that is essential for myelination. However, little is known about the ion channel profile of mature myelinating oligodendrocytes. Here, we identify for the first time colocalization of Kir5.1 with Kir4.1 in oligodendrocytes in white matter. Immunolocalization with membrane-bound Na +/K +-ATPase and western blot of the plasma membrane fraction of the optic nerve, a typical CNS white matter tract containing axons and the oligodendrocytes that myelinate them, demonstrates that Kir4.1 and Kir5.1 are colocalized on oligodendrocyte cell membranes. Co-immunoprecipitation provides evidence that oligodendrocytes and astrocytes express a combination of homomeric Kir4.1 and heteromeric Kir4.1/Kir5.1 channels. Genetic knock-out and shRNA to ablate Kir4.1 indicates plasmalemmal expression of Kir5.1 in glia is largely dependent on Kir4.1 and the plasmalemmal anchoring protein PSD-95. The results demonstrate that, in addition to astrocytes, oligodendrocytes express both homomeric Kir4.1 and heteromeric Kir4.1/Kir5.1 channels. In astrocytes, these channels are essential to their key functions of K + uptake and CO 2/H + chemosensation. We propose Kir4.1/Kir5.1 channels have equivalent functions in oligodendrocytes, maintaining myelin integrity in the face of large ionic shifts associated with action potential propagation along myelinated axons.

Biljana Djukic,  Kristen B Casper,  Benjamin D Philpot … (2007)
During neuronal activity, extracellular potassium concentration ([K+]out) becomes elevated and, if uncorrected, causes neuronal depolarization, hyperexcitability, and seizures. Clearance of K+ from the extracellular space, termed K+ spatial buffering, is considered to be an important function of astrocytes. Results from a number of studies suggest that maintenance of [K+]out by astrocytes is mediated by K+ uptake through the inward-rectifying Kir4.1 channels. To study the role of this channel in astrocyte physiology and neuronal excitability, we generated a conditional knock-out (cKO) of Kir4.1 directed to astrocytes via the human glial fibrillary acidic protein promoter gfa2. Kir4.1 cKO mice die prematurely and display severe ataxia and stress-induced seizures. Electrophysiological recordings revealed severe depolarization of both passive astrocytes and complex glia in Kir4.1 cKO hippocampal slices. Complex cell depolarization appears to be a direct consequence of Kir4.1 removal, whereas passive astrocyte depolarization seems to arise from an indirect developmental process. Furthermore, we observed a significant loss of complex glia, suggestive of a role for Kir4.1 in astrocyte development. Kir4.1 cKO passive astrocytes displayed a marked impairment of both K+ and glutamate uptake. Surprisingly, membrane and action potential properties of CA1 pyramidal neurons, as well as basal synaptic transmission in the CA1 stratum radiatum appeared unaffected, whereas spontaneous neuronal activity was reduced in the Kir4.1 cKO. However, high-frequency stimulation revealed greatly elevated posttetanic potentiation and short-term potentiation in Kir4.1 cKO hippocampus. Our findings implicate a role for glial Kir4.1 channel subunit in the modulation of synaptic strength.

Carlos Matute (corresponding) ,  Iratxe Torre,  Fernando Pérez-Cerdá … (2007)
Oligodendrocyte death and demyelination are hallmarks of multiple sclerosis (MS). Here we show that ATP signaling can trigger oligodendrocyte excitotoxicity via activation of calcium-permeable P2X(7) purinergic receptors expressed by these cells. Sustained activation of P2X(7) receptors in vivo causes lesions that are reminiscent of the major features of MS plaques, i.e., demyelination, oligodendrocyte death, and axonal damage. In addition, treatment with P2X(7) antagonists of chronic experimental autoimmune encephalomyelitis (EAE), a model of MS, reduces demyelination and ameliorates the associated neurological symptoms. Together, these results indicate that ATP can kill oligodendrocytes via P2X(7) activation and that this cell death process contributes to EAE. Importantly, P2X(7) expression is elevated in normal-appearing axon tracts in MS patients, suggesting that signaling through this receptor in oligodendrocytes may be enhanced in this disease. Thus, P2X(7) receptor antagonists may be beneficial for the treatment of MS.

C Ohlemeyer,  F Kirchhoff,  T Pivneva … (2000)
We have generated transgenic mice in which astrocytes are labeled by the enhanced green fluorescent protein (EGFP) under the control of the human glial fibrillary acidic protein (GFAP) promoter. In all regions of the CNS, such as cortex, cerebellum, striatum, corpus callosum, hippocampus, retina, and spinal cord, EGFP-positive cells with morphological properties of astrocytes could be readily visualized by direct fluorescence microscopy in living brain slices or whole mounts. Also in the PNS, nonmyelinating Schwann cells from the sciatic nerve could be identified by their bright green fluorescence. Highest EGFP expression was found in the cerebellum. Already in acutely prepared whole brain, the cerebellum appeared green-yellowish under normal daylight. Colabeling with GFAP antibodies revealed an overlap with EGFP in the majority of cells. Some brain areas, however, such as retina or hypothalamus, showed only low levels of EGFP expression, although the astrocytes were rich in GFAP. In contrast, some areas that were poor in immunoreactive GFAP were conspicuous for their EGFP expression. Applying the patch clamp technique in brain slices, EGFP-positive cells exhibited two types of membrane properties, a passive membrane conductance as described for astrocytes and voltage-gated channels as described for glial precursor cells. Electron microscopical investigation of ultrastructural properties revealed EGFP-positive cells enwrapping synapses by their fine membrane processes. EGFP-positive cells were negative for oligodendrocyte (MAG) and neuronal markers (NeuN). As response to injury, i.e., by cortical stab wounds, enhanced levels of EGFP expression delineated the lesion site and could thus be used as a live marker for pathology.