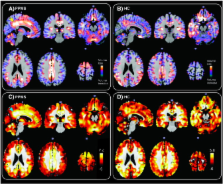 Grey matter (GM) atrophy occurs early in primary progressive MS (PPMS), but it is unknown whether its progression involves different brain regions at different rates, as is seen in other neurodegenerative diseases. We aimed to investigate the temporal and regional evolution of GM volume loss over 5 years and its relationship with disability progression in early PPMS.

We studied 36 patients with PPMS within five years from onset and 19 age and gender-matched healthy controls with clinical and imaging assessments at study entry and yearly for 3 years and then at 5 years. Patients were scored on the expanded disability status scale (EDSS) and MS Functional Composite (MSFC) at each time-point. An unbiased longitudinal voxel-based morphometry approach, based on high-dimensional spatial alignment within-subject, was applied to the serial imaging data. The rate of local (voxel-wise) volume change per year was compared between groups and its relationship with clinical outcomes was assessed.

Patients deteriorated significantly during the five years follow-up. Patients showed a greater decline of GM volume ( p < 0.05, FWE-corrected) bilaterally in the cingulate cortex, thalamus, putamen, precentral gyrus, insula and cerebellum when compared to healthy controls over five years, although the rate of volume loss varied across the brain, and was the fastest in the cingulate cortex. Significant ( p < 0.05, FWE-corrected) volume loss was detected in the left insula, left precuneus, and right cingulate cortex in patients at three years, as compared to baseline, whilst the bilateral putamen and the left superior temporal gyrus showed volume loss at five years. In patients, there was a relationship between a higher rate of volume loss in the bilateral cingulate cortex and greater clinical disability, as measured by the MSFC, at five years (Pearson's r = 0.49, p = 0.003).

Longitudinal VBM demonstrated that the progression of GM atrophy in PPMS occurs at different rates in different regions across the brain. The involvement of the cingulate cortex occurs early in the disease course, continues at a steady rate throughout the follow-up period and is associated with patient outcome. These findings provide new insights into the characteristics of GM atrophy across the brain in MS, and have potential consequences for the selection of brain atrophy as an outcome measure in neuroprotective clinical trials.

A default mode of brain function.

M Raichle,  A MacLeod,  A Snyder … (2001)
A baseline or control state is fundamental to the understanding of most complex systems. Defining a baseline state in the human brain, arguably our most complex system, poses a particular challenge. Many suspect that left unconstrained, its activity will vary unpredictably. Despite this prediction we identify a baseline state of the normal adult human brain in terms of the brain oxygen extraction fraction or OEF. The OEF is defined as the ratio of oxygen used by the brain to oxygen delivered by flowing blood and is remarkably uniform in the awake but resting state (e.g., lying quietly with eyes closed). Local deviations in the OEF represent the physiological basis of signals of changes in neuronal activity obtained with functional MRI during a wide variety of human behaviors. We used quantitative metabolic and circulatory measurements from positron-emission tomography to obtain the OEF regionally throughout the brain. Areas of activation were conspicuous by their absence. All significant deviations from the mean hemisphere OEF were increases, signifying deactivations, and resided almost exclusively in the visual system. Defining the baseline state of an area in this manner attaches meaning to a group of areas that consistently exhibit decreases from this baseline, during a wide variety of goal-directed behaviors monitored with positron-emission tomography and functional MRI. These decreases suggest the existence of an organized, baseline default mode of brain function that is suspended during specific goal-directed behaviors.

Teri S Krebs (2002)
An automated method for segmenting magnetic resonance head images into brain and non-brain has been developed. It is very robust and accurate and has been tested on thousands of data sets from a wide variety of scanners and taken with a wide variety of MR sequences. The method, Brain Extraction Tool (BET), uses a deformable model that evolves to fit the brain's surface by the application of a set of locally adaptive model forces. The method is very fast and requires no preregistration or other pre-processing before being applied. We describe the new method and give examples of results and the results of extensive quantitative testing against "gold-standard" hand segmentations, and two other popular automated methods. Copyright 2002 Wiley-Liss, Inc.