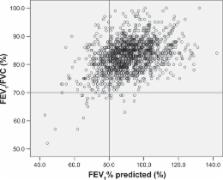 Few studies have investigated the significance of decreased FEV 1 in non-COPD, nonasthmatic healthy subjects. We hypothesized that a lower FEV 1 in these subjects is a potential marker of an increased susceptibility to obstructive lung disease such as asthma and COPD. This was a cross-sectional analysis of 1505 Japanese adults. We divided the population of healthy adults with no respiratory diseases whose FEV 1/FVC ratio was ≥70% (n = 1369) into 2 groups according to their prebronchodilator FEV 1 (% predicted) measurements: <80% (n = 217) and ≥80% (n = 1152). We compared clinical data – including gender, age, smoking habits, total IgE levels, and annual decline of FEV 1 – between these 2 groups. In addition, as our group recently found that TSLP variants are associated with asthma and reduced lung function, we assessed whether TSLP single nucleotide polymorphisms (SNPs) were associated with baseline lung function in non-COPD, nonasthmatic healthy subjects (n = 1368). Although about half of the subjects with lower FEV 1 had never smoked, smoking was the main risk factor for the decreased FEV 1 in non-COPD, nonasthmatic subjects. However, the subjects with lower FEV 1 had a significantly higher annual decline in FEV 1 independent of smoking status. Airflow obstruction was associated with increased levels of total serum IgE ( P = 0.029) and with 2 functional TSLP SNPs (corrected P = 0.027–0.058 for FEV 1% predicted, corrected P = 0.015–0.033 for FEV 1/FVC). This study highlights the importance of early recognition of a decreased FEV 1 in healthy subjects without evident pulmonary diseases because it predicts a rapid decline in FEV 1 irrespective of smoking status. Our series of studies identified TSLP variants as a potential susceptibility locus to asthma and to lower lung function in non-COPD, nonasthmatic healthy subjects, which may support the contention that genetic determinants of lung function influence susceptibility to asthma.

Thymic stromal lymphopoietin expression is increased in asthmatic airways and correlates with expression of Th2-attracting chemokines and disease severity.

Guizhen Zhang,  Sun Ying,  David Cousins … (2005)
Thymic stromal lymphopoietin (TSLP) is said to increase expression of chemokines attracting Th2 T cells. We hypothesized that asthma is characterized by elevated bronchial mucosal expression of TSLP and Th2-attracting, but not Th1-attracting, chemokines as compared with controls, with selective accumulation of cells bearing receptors for these chemokines. We used in situ hybridization and immunohistochemistry to examine the expression and cellular provenance of TSLP, Th2-attracting (thymus and activation-regulated chemokine (TARC)/CCL17, macrophage-derived chemokine (MDC)/CCL22, I-309/CCL1) and Th1-attracting (IFN-gamma-inducible protein 10 (IP-10)/CXCL10, IFN-inducible T cell alpha-chemoattractant (I-TAC)/CXCL11) chemokines and expression of their receptors CCR4, CCR8, and CXCR3 in bronchial biopsies from 20 asthmatics and 15 normal controls. The numbers of cells within the bronchial epithelium and submucosa expressing mRNA for TSLP, TARC/CCL17, MDC/CCL22, and IP-10/CXCL10, but not I-TAC/CXCL11 and I-309/CCL1, were significantly increased in asthmatics as compared with controls (p

Lung function and mortality in the United States: data from the First National Health and Nutrition Examination Survey follow up study.

Rafe Petty,  S Redd,  A Buist … (2003)
A study was undertaken to define the risk of death among a national cohort of US adults both with and without lung disease. Participants in the first National Health and Nutrition Examination Survey (NHANES I) followed for up to 22 years were studied. Subjects were classified using a modification of the Global Initiative for Chronic Obstructive Lung Disease criteria for chronic obstructive pulmonary disease (COPD) into the following mutually exclusive categories using the forced expiratory volume in 1 second (FEV(1)), forced vital capacity (FVC), FEV(1)/FVC ratio, and the presence of respiratory symptoms: severe COPD, moderate COPD, mild COPD, respiratory symptoms only, restrictive lung disease, and no lung disease. Proportional hazard models were developed that controlled for age, race, sex, education, smoking status, pack years of smoking, years since quitting smoking, and body mass index. A total of 1301 deaths occurred in the 5542 adults in the cohort. In the adjusted proportional hazards model the presence of severe or moderate COPD was associated with a higher risk of death (hazard ratios (HR) 2.7 and 1.6, 95% confidence intervals (CI) 2.1 to 3.5 and 1.4 to 2.0), as was restrictive lung disease (HR 1.7, 95% CI 1.4 to 2.0). The presence of both obstructive and restrictive lung disease is a significant predictor of earlier death in long term follow up.