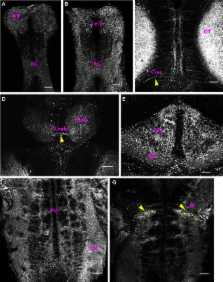 Gap junctions are membrane specializations that allow the passage of ions and small molecules from one cell to another. In vertebrates, connexins are the protein subunits that assemble to form gap junctional plaques. Connexin-35 (Cx35) is the fish ortholog of mammalian Cx36, which is enriched in the retina and the brain and has been shown to form neuronal gap junctions. As a first step toward understanding the role of neuronal gap junctions in central nervous system (CNS) development, we describe here the distribution of Cx35 in the CNS during zebrafish development. Cx35 expression is first seen at 1 day post fertilization (dpf) along cell boundaries throughout the nervous system. At 2 dpf, Cx35 immunoreactivity appears in commissures and fiber tracts throughout the CNS and along the edges of the tectal neuropil. In the rhombencephalon, the Mauthner neurons and fiber tracts show strong Cx35 immunoreactivity. As the larva develops, the commissures and fiber tracts continue to be immunoreactive for Cx35. In addition, the area of the tectal neuropil stained increases vastly and tectal commissures are visible. Furthermore, at 4–5 dpf, Cx35 is seen in the habenulae, cerebellum and in radial glia lining the rhombencephalic ventricle. This pattern of Cx35 immunoreactivity is stable at least until 15 dpf. To test whether the Cx35 immunoreactivity seen corresponds to functional gap junctional coupling, we documented the number of dye-coupled neurons in the hindbrain. We found several dye-coupled neurons within the reticulospinal network indicating functional gap junctional connectivity in the developing zebrafish brain.

Electrical synapses in the mammalian brain.

B. Long,  Barry W. Connors (2003)
Many neurons in the mammalian central nervous system communicate through electrical synapses, defined here as gap junction-mediated connections. Electrical synapses are reciprocal pathways for ionic current and small organic molecules. They are often strong enough to mediate close synchronization of subthreshold and spiking activity among clusters of neurons. The most thoroughly studied electrical synapses occur between excitatory projection neurons of the inferior olivary nucleus and between inhibitory interneurons of the neocortex, hippocampus, and thalamus. All these synapses require the gap junction protein connexin36 (Cx36) for robust electrical coupling. Cx36 appears to interconnect neurons exclusively, and it is expressed widely along the mammalian neuraxis, implying that there are undiscovered electrical synapses throughout the central nervous system. Some central neurons may be electrically coupled by other connexin types or by pannexins, a newly described family of gap junction proteins. Electrical synapses are a ubiquitous yet underappreciated feature of neural circuits in the mammalian brain.

Rekha Kar,  Nidhi Batra,  Manuel A. Riquelme … (2012)
Gap junctions (GJ) and hemichannels (HC) formed from the protein subunits called connexins are transmembrane conduits for the exchange of small molecules and ions. Connexins and another group of HC-forming proteins, pannexins comprise the two families of transmembrane proteins ubiquitously distributed in vertebrates. Most cell types express more than one connexin or pannexin. While connexin expression and channel activity may vary as a function of physiological and pathological states of the cell and tissue, only a few studies suggest the involvement of pannexin HC in acquired pathological conditions. Importantly, genetic mutations in connexin appear to interfere with GJ and HC function which results in several diseases. Thus connexins could serve as potential drug target for therapeutic intervention. Growing evidence suggests that diseases resulting from HC dysfunction might open a new direction for development of specific HC reagents. This review provides a comprehensive overview of the current studies of GJ and HC formed by connexins and pannexins in various tissue and organ systems including heart, central nervous system, kidney, mammary glands, ovary, testis, lens, retina, inner ear, bone, cartilage, lung and liver. In addition, present knowledge of the role of GJ and HC in cell cycle progression, carcinogenesis and stem cell development is also discussed. Copyright © 2012 Elsevier Inc. All rights reserved.