Effect of Tactile Stimulation on Termination and Prevention of Apnea of Prematurity: A Systematic Review 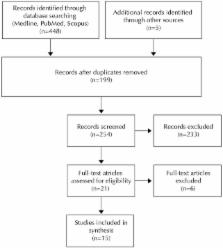 Apnea of prematurity (AOP) is one of the most common diagnoses in preterm infants. Severe and recurrent apneas are associated with cerebral injury and adverse neurodevelopmental outcome. Despite pharmacotherapy and respiratory support to prevent apneas, a proportion of infants continue to have apneas and often need tactile stimulation, mask, and bag ventilation and/or extra oxygen. The duration of the apnea and the concomitant hypoxia and bradycardia depends on the response time of the nurse. We systematically reviewed the literature with the aim of providing an overview of what is known about the effect of manual and mechanical tactile stimulation on AOP. Tactile stimulation, manual or mechanical, has been shown to shorten the duration of apnea, hypoxia, and or bradycardia or even prevent an apnea. Automated stimulation, using closed-loop pulsating or vibrating systems, has been shown to be effective in terminating apneas, but data are scarce. Several studies used continuous mechanical stimulation, with pulsating, vibrating, or oscillating stimuli, to prevent apneas, but the reported effect varied. More studies are needed to confirm whether automated stimulation using a closed loop is more effective than manual stimulation, how and where the automated stimulation should be performed and the potential side effects.

R T Verrillo,  G Gescheider,  Stanley J Bolanowski … (1988)
Although previous physiological and anatomical experiments have identified four afferent fiber types (PC, RA, SA II, and SA I) in glabrous (nonhairy) skin of the human somatosensory periphery, only three have been shown to mediate tactile (mechanoreceptive) sensation. Psychophysical evidence that four channels (P, NP I, NP II, and NP III) do, indeed, participate in the perceptual process is presented. In a series of experiments involving selective masking of the various channels, modification of the skin-surface temperature, and testing cutaneous sensitivity down to very low-vibratory frequencies, the fourth psychophysical channel (NP III) is defined. Based on these experiments and previous work from our laboratory, it is concluded that the four channels work in conjunction at threshold to create an operating range for the perception of vibration that extends from at least 0.4 to greater than 500 Hz. Each of the four channels appears to mediate specific portions of the overall threshold-frequency characteristic. Selection of appropriate neural-response criteria from previously published physiological data and correlation of their derived frequency characteristics with the four psychophysical channels indicates that each channel has its own physiological substrate: P channel and PC fibers, NP I channel and RA fibers, NP II channel and SA II fibers, and NP III channel and SA I fibers. These channels partially overlap in their absolute sensitivities, making it likely that suprathreshold stimuli may activate two or more of the channels at the same time. Thus the perceptual qualities of touch may be determined by the combined inputs from four channels.

Kinaesthetic role of muscle afferents in man, studied by tendon vibration and microneurography.

J P Vedel,  J Devon Roll (1981)
The characteristics of vibration-induced illusory joint movements were studied in healthy human subjects. Unseen by the subject, constant frequency vibration trains applied to the distal tendon of the Triceps or Biceps induced an almost constant velocity illusory movement of the elbow whose direction corresponded to that of a joint rotation stretching the vibrated muscle. Vibration trains of the same duration and frequency applied alternatively to the Biceps and Triceps evoked alternating flexion-extension illusory movements. During successive application of vibration trains at frequencies from 10 to 120 Hz, the perceived velocity of the illustory movements increased progressively from 10 to 70-80 Hz, then decreased from 80 to 120 Hz. The maximal perceived velocity was three times higher during alternating vibration of the Biceps and Triceps than during single muscle stimulation. Unit activity from 15 muscle spindle primary endings and five secondary endings located in Tibialis anterior and Extensor digitorum longus muscles were recorded using microneurography in order to study their responses to tendon vibration and passive and active movements of the ankle. Primary endings were all activated by low amplitude tendon vibration (0.2-0.5 mm) previously used to induce illusory movements of the elbow. The discharge of some was phase-locked with the vibration cycle up to 120 Hz, while others responded one-to-one to the vibration cycle up to 30-50 Hz, then fired in a sub-harmonic manner at higher frequencies. Secondary endings were much less sensitive to low amplitude tendon vibration. Primary and secondary ending responses to ramp and sinusoidal movements of the ankle joint were compared. During the movement, the primary ending discharge frequency was almost constant, while the secondary ending activity progressively increased. During ankle movements the primary ending discharge appeared mainly related to velocity, while some secondary activities seemed related to both movement velocity and joint angle position. Muscle spindle sensory ending responses to active and passive ankle movements stretching the receptor-bearing muscle (plantar flexion) were qualitatively and quantitatively similar. During passive reverse movements (dorsiflexion) most of the sensory endings stopped firing when their muscle shortened. Active muscle shortening (isotonic contraction) modulated differently the muscle spindle sensory ending discharge, which could stop completely, decrease or some times increase during active ankle dorsiflexion. During isometric contraction most of the muscle spindle sensory endings were activated. The characteristics of the vibration-induced illusory movements and the muscle spindle responses to tendon vibration and to active and passive joint movements strengthened the possibility of the contribution of primary endings to kinesthesia, as suggested by several previous works...

Apnea of prematurity: from cause to treatment

Jing-jing Zhao,  Fernando Meneses-González,  Dezhi Mu (2011)
Apnea of prematurity (AOP) is a common problem affecting premature infants, likely secondary to a “physiologic” immaturity of respiratory control that may be exacerbated by neonatal disease. These include altered ventilatory responses to hypoxia, hypercapnia, and altered sleep states, while the roles of gastroesophageal reflux and anemia remain controversial. Standard clinical management of the obstructive subtype of AOP includes prone positioning and continuous positive or nasal intermittent positive pressure ventilation to prevent pharyngeal collapse and alveolar atelectasis, while methylxanthine therapy is a mainstay of treatment of central apnea by stimulating the central nervous system and respiratory muscle function. Other therapies, including kangaroo care, red blood cell transfusions, and CO2 inhalation, require further study. The physiology and pathophysiology behind AOP are discussed, including the laryngeal chemoreflex and sensitivity to inhibitory neurotransmitters, as are the mechanisms by which different therapies may work and the potential long-term neurodevelopmental consequences of AOP and its treatment.

Specialty section: This article was submitted to Neonatology, a section of the journal Frontiers in Pediatrics