Lung function, asthma symptoms, and quality of life for children in public housing in Boston: a case-series analysis 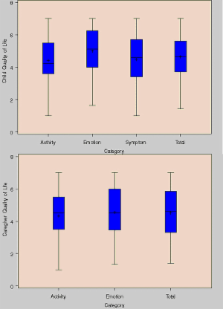 Children in urban public housing are at high risk for asthma, given elevated environmental and social exposures and suboptimal medical care. For a multifactorial disease like asthma, design of intervention studies can be influenced by the relative prevalence of key risk factors. To better understand risk factors for asthma morbidity in the context of an environmental intervention study, we conducted a detailed baseline evaluation of 78 children (aged 4–17 years) from three public housing developments in Boston.

Asthmatic children and their caregivers were recruited between April 2002 and January 2003. We conducted intake interviews that captured a detailed family and medical history, including questions regarding asthma symptom severity, access to health care, medication usage, and psychological stress. Quality of life was evaluated for both the child and caregiver with an asthma-specific scale. Pulmonary function was measured with a portable spirometer, and allergy testing for common indoor and outdoor allergens was conducted with skin testing using the prick puncture method. Exploratory linear and logistic regression models evaluating predictors of respiratory symptoms, quality of life, and pulmonary function were conducted using SAS.

We found high rates of obesity (56%) and allergies to indoor contaminants such as cockroaches (59%) and dust mites (59%). Only 36% of children with persistent asthma reported being prescribed any daily controller medication, and most did not have an asthma action plan or a peak flow meter. One-time lung function measures were poorly correlated with respiratory symptoms or quality of life, which were significantly correlated with each other. In multivariate regression models, household size, body mass index, and environmental tobacco smoke exposure were positively associated with respiratory symptom severity (p < 0.10). Symptom severity was negatively associated with asthma-related quality of life for the child and the caregiver, with caregiver (but not child) quality of life significantly influenced by caregiver stress and whether the child was in the intensive care unit at birth.

Given the elevated prevalence of multiple risk factors, coordinated improvements in the social environment, the built environment, and in medical management would likely yield the greatest health benefits in this high-risk population.

Asthma: an epidemic of dysregulated immunity.

Dale T. Umetsu,  Omid Akbari,  Patti J McIntire … (2002)
The remarkable increase in asthma prevalence that has occurred over the last two decades is thought to be caused by changes in the environment due to improved hygiene and fewer childhood infections. However, the specific infections that limit T helper type 2 (T(H)2)-biased inflammation and asthma are not fully known. Infectious organisms, including commensal bacteria in the gastrointestinal tract and hepatitis A virus, may normally induce the development of regulatory T (T(R)) cells and protective immunity that limit airway inflammation and promote tolerance to respiratory allergens. In the absence of such infections, T(H)2 cells--which are developmentally related to T(R) cells--develop instead and coordinate the development of asthmatic inflammation.

Alesha Wright,  O Cohen,  Susana Garcia (1998)
Environmental stressors may impact asthma morbidity through neuroimmunological mechanisms which are adversely impacted and/or buffered y social networks, social support, and psychological functioning. In addition, life stress may impact on health beliefs and behaviours that may affect asthma management. Whereas earlier psychosomatic models have supported a role for psychological stress in contributing to variable asthma morbidity among those with existing disease, a growing appreciation of the interactions between behavioural, neural, endocrine, and immune processes suggest a role for these psychosocial factors in the genesis of asthma as well. While a causal link between stress and asthma has not bee established, this review provides a framework in which we can begin to see links between these systems that might provide new insights to guide future explorations. The complexity of these interactions underscore the need for a multidisciplinary approach which combines the idea that the origin of asthma is purely psychogenic in nature with the antithetical consideration that the biological aspects are all important. These distinctions are artificial, and future research that synthesizes biological, psychological, sociocultural, and family parameters is urgently needed to further our understanding of the rising burden of asthma.

Shelly K Weiss,  C. Richard Lyttle,  Brooke K. Sullivan (2000)
During the past decade, there have been notable changes in asthma prevalence, morbidity, and mortality. In this same time period, there have also been important national efforts to increase asthma awareness and improve asthma care. The purpose of this study was to examine the changes in US cost of illness for asthma during the 10-year period from 1985-1994. The study was a two-period (1985 and 1994), cross-sectional, cost-of-illness analysis. Cost estimates were based on US population and health care survey data available from the National Center for Health Statistics. The total US costs of asthma for 1994 were $10.7 billion. On the basis of 1985 estimates adjusted to 1994 dollars, total asthma costs increased by 54.1% and direct medical expenditures increased by 20.4% during the 10-year period. In 1985, hospital inpatient care represented the largest component cost of direct medical expenditures (44.6%). Hospital inpatient costs decreased to 29.5% of direct medical expenditures in 1994, primarily because of shorter lengths of stay, as opposed to a decrease in the total number of admissions. In 1994, medications represented the largest component cost of direct medical expenditures (40.1%, up from 30.0% in 1985). The largest component increase in indirect costs was due to loss of work. On the basis of adjusted dollars, estimated costs per affected person with asthma declined by 3.4% (decrease of 15.5% for children and an increase of 2.9% for persons 18 years and older) during this time period. Although the US costs of asthma increased during the 1985-1994 time period, estimated costs per person with asthma demonstrated a modest decline. These findings may represent a combination of reductions in hospital lengths of stay and increasing prevalence of persons with low consumption of asthma-related health care resources. In examining the component costs, it is unclear whether these changes can be attributed to the many local, regional, and national efforts aimed at controlling untoward asthma outcomes during the 1985-1994 time period.