Optimization of an AMBER Force Field for the Artificial Nucleic Acid, LNA, and Benchmarking with NMR of L(CAAU) 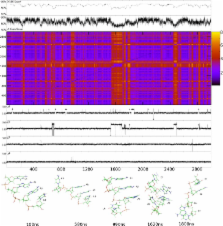 Journal: The Journal of Physical Chemistry. B 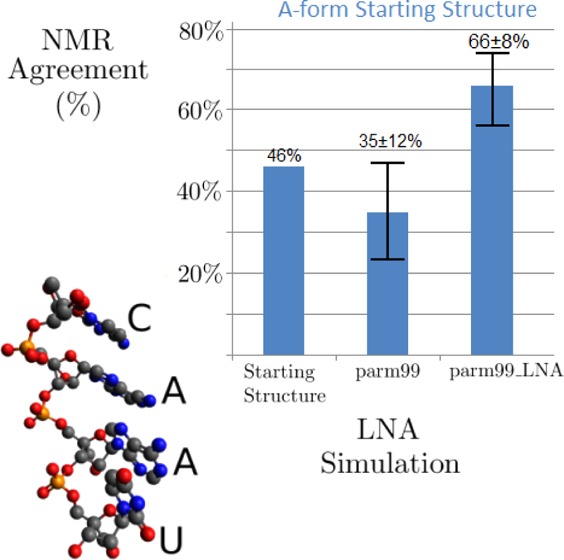 Locked Nucleic Acids (LNAs) are RNA analogues with an O2′-C4′ methylene bridge which locks the sugar into a C3′-endo conformation. This enhances hybridization to DNA and RNA, making LNAs useful in microarrays and potential therapeutics. Here, the LNA, L(CAAU), provides a simplified benchmark for testing the ability of molecular dynamics (MD) to approximate nucleic acid properties. LNA χ torsions and partial charges were parametrized to create AMBER parm99_LNA. The revisions were tested by comparing MD predictions with AMBER parm99 and parm99_LNA against a 200 ms NOESY NMR spectrum of L(CAAU). NMR indicates an A-Form equilibrium ensemble. In 3000 ns simulations starting with an A-form structure, parm99_LNA and parm99 provide 66% and 35% agreement, respectively, with NMR NOE volumes and 3 J-couplings. In simulations of L(CAAU) starting with all χ torsions in a syn conformation, only parm99_LNA is able to repair the structure. This implies methods for parametrizing force fields for nucleic acid mimics can reasonably approximate key interactions and that parm99_LNA will improve reliability of MD studies for systems with LNA. A method for approximating χ population distribution on the basis of base to sugar NOEs is also introduced.

P Cieplak,  P A Kollman,  T E Cheatham (1999)
We have examined some subtle parameter modifications to the Cornell et al. force field, which has proven quite successful in reproducing nucleic acid properties, but whose C2'-endo sugar pucker phase and helical repeat for B DNA appear to be somewhat underestimated. Encouragingly, the addition of a single V2 term involving the atoms C(sp3)-O-(sp3)-C(sp3)-N(sp2), which can be nicely rationalized because of the anomeric effect (lone pairs on oxygen are preferentially oriented relative to the electron withdrawing N), brings the sugar pucker phase of C2'-endo sugars to near perfect agreement with ab initio calculations (W near 162 degrees). Secondly, the use of high level ab initio calculations on entire nucleosides (in contrast to smaller model systems necessitated in 1994-95 by computer limitations) lets one improve the chi torsional potential for nucleic acids. Finally, the O(sp3)-C(sp3)- C(sp3)-O(sp3) V2 torsional potential has been empirically adjusted to reproduce the ab initio calculated relative energy of C2'-endo and C3'-endo nucleosides. These modifications are tested in molecular dynamics simulations of mononucleosides (to assess sugar pucker percentages) and double helices of DNA and RNA (to assess helical and sequence specific structural properties). In both areas, the modified force field leads to improved agreement with experimental data.

Stabilization and structure calculations for noncovalent interactions in extended molecular systems based on wave function and density functional theories.

Rhiju Das,  David Baker (2007)
RNA tertiary structure prediction has been based almost entirely on base-pairing constraints derived from phylogenetic covariation analysis. We describe here a complementary approach, inspired by the Rosetta low-resolution protein structure prediction method, that seeks the lowest energy tertiary structure for a given RNA sequence without using evolutionary information. In a benchmark test of 20 RNA sequences with known structure and lengths of approximately 30 nt, the new method reproduces better than 90% of Watson-Crick base pairs, comparable with the accuracy of secondary structure prediction methods. In more than half the cases, at least one of the top five models agrees with the native structure to better than 4 A rmsd over the backbone. Most importantly, the method recapitulates more than one-third of non-Watson-Crick base pairs seen in the native structures. Tandem stacks of "sheared" base pairs, base triplets, and pseudoknots are among the noncanonical features reproduced in the models. In the cases in which none of the top five models were native-like, higher energy conformations similar to the native structures are still sampled frequently but not assigned low energies. These results suggest that modest improvements in the energy function, together with the incorporation of information from phylogenetic covariance, may allow confident and accurate structure prediction for larger and more complex RNA chains.