From iconic handshapes to grammatical contrasts: longitudinal evidence from a child homesigner 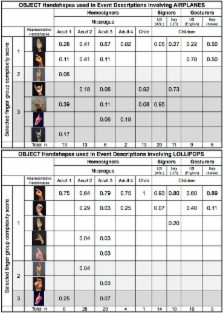 Many sign languages display crosslinguistic consistencies in the use of two iconic aspects of handshape, handshape type and finger group complexity. Handshape type is used systematically in form-meaning pairings (morphology): Handling handshapes (Handling-HSs), representing how objects are handled, tend to be used to express events with an agent (“ hand-as-hand” iconicity), and Object handshapes (Object-HSs), representing an object's size/shape, are used more often to express events without an agent (“ hand-as-object” iconicity). Second, in the distribution of meaningless properties of form (morphophonology), Object-HSs display higher finger group complexity than Handling-HSs. Some adult homesigners, who have not acquired a signed or spoken language and instead use a self-generated gesture system, exhibit these two properties as well. This study illuminates the development over time of both phenomena for one child homesigner, “Julio,” age 7;4 (years; months) to 12;8. We elicited descriptions of events with and without agents to determine whether morphophonology and morphosyntax can develop without linguistic input during childhood, and whether these structures develop together or independently. Within the time period studied: (1) Julio used handshape type differently in his responses to vignettes with and without an agent; however, he did not exhibit the same pattern that was found previously in signers, adult homesigners, or gesturers: while he was highly likely to use a Handling-HS for events with an agent (82%), he was less likely to use an Object-HS for non-agentive events (49%); i.e., his productions were heavily biased toward Handling-HSs; (2) Julio exhibited higher finger group complexity in Object- than in Handling-HSs, as in the sign language and adult homesigner groups previously studied; and (3) these two dimensions of language developed independently, with phonological structure showing a sign language-like pattern at an earlier age than morphosyntactic structure. We conclude that iconicity alone is not sufficient to explain the development of linguistic structure in homesign systems. Linguistic input is not required for some aspects of phonological structure to emerge in childhood, and while linguistic input is not required for morphology either, it takes time to emerge in homesign.

Iconicity as a General Property of Language: Evidence from Spoken and Signed Languages

Pamela Perniss,  Robin Thompson,  Gabriella Vigliocco (2010)
Current views about language are dominated by the idea of arbitrary connections between linguistic form and meaning. However, if we look beyond the more familiar Indo-European languages and also include both spoken and signed language modalities, we find that motivated, iconic form-meaning mappings are, in fact, pervasive in language. In this paper, we review the different types of iconic mappings that characterize languages in both modalities, including the predominantly visually iconic mappings found in signed languages. Having shown that iconic mapping are present across languages, we then proceed to review evidence showing that language users (signers and speakers) exploit iconicity in language processing and language acquisition. While not discounting the presence and importance of arbitrariness in language, we put forward the idea that iconicity need also be recognized as a general property of language, which may serve the function of reducing the gap between linguistic form and conceptual representation to allow the language system to “hook up” to motor, perceptual, and affective experience.

The emergence of grammar: systematic structure in a new language.

Irit Meir,  David M Aronoff,  Carol Padden … (2005)
This report contains a linguistic description of a language created spontaneously without any apparent external influence in a stable existing community. We describe the syntactic structure of Al-Sayyid Bedouin Sign Language, a language that has arisen in the last 70 years in an isolated endogamous community with a high incidence of nonsyndromic, genetically recessive, profound prelingual neurosensory deafness. In the space of one generation from its inception, systematic grammatical structure has emerged in the language. Going beyond a conventionalized list of words for actions, objects, people, characteristics, and so on, a systematic way of marking the grammatical relations among those elements has appeared in the form of highly regular word order. These systematic structures cannot be attributed to influence from other languages, because the particular word orders that appear in Al-Sayyid Bedouin Sign Language differ from those found both in the ambient spoken languages in the community and in the other sign language found predominantly in the surrounding area. Therefore, the emerging grammatical structures should be regarded as an independent development within the language.

Critical period effects on universal properties of language: the status of subjacency in the acquisition of a second language.

Elissa Newport,  Tanya Johnson (1991)
Recent studies have shown clear evidence for critical period effects for both first and second language acquisition on a broad range of learned, language-specific grammatical properties. The present studies ask whether and to what degree critical period effects can also be found for universal properties of language considered to be innate. To address this issue, native Chinese speakers who learned English as a second language were tested on the universal principle subjacency as it applies to wh-question formation in English. Subjects arrived in the U.S.A. between the ages of 4 and 38 years. They were immersed in English for a number of years (a minimum of 5) and were adults at the time of testing. Non-native performance on subjacency was found for subjects of all ages of arrival. Performance declined continuously over age of arrival until adulthood, (r = -.63). When immersion occurred as late as adulthood, performance dropped to levels slightly above chance. In all of the analyses performed, subjacency did not differ from language-specific structures in the degree or manner in which it was affected by maturation. These results suggest that whatever the nature of the endowment that allows humans to learn language, it undergoes a very broad deterioration as learners become increasingly mature.