Clinical outcomes of 125I brachytherapy with and without external-beam radiation therapy for localized prostate cancer: results from 300 patients at a single institution in Japan 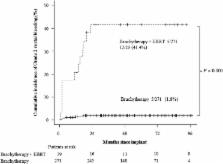 The aim of this study was to determine the outcomes and adverse events for 300 men with prostate cancer treated with 125iodine ( 125I) brachytherapy with and without external-beam radiation therapy (EBRT) at a single institution in Japan. Between February 2005 and November 2011, 300 consecutive patients with clinically localized prostate cancer were treated with 125I brachytherapy at the Nagoya University Hospital. A total of 271 men were treated with implants with doses of 145 Gy, and 29 men were treated with implants with doses of 110 Gy combined with EBRT (40–50 Gy/20–25 fractions). The median patient age was 69 years (range, 53–83 years). The median follow-up period was 53 months (range, 5–99 months). According to the National Comprehensive Cancer Network risk classification, 132 men (44%) had low-risk, 147 men (29%) had intermediate-risk and 21 men (7%) had high-risk disease. The 5-year overall survival rate, biochemical relapse–free survival rate, and disease-specific survival rates were 93.5%, 97.3% and 98.5%, respectively. Two men (0.6%) died of prostate cancer and 10 men (3.3%) died of other causes. Seventeen men (5.6%) experienced Grade 2 rectal bleeding in all: 12 (41.4%) of 29 in brachytherapy with EBRT, and 5 (1.8%) of 271 in brachytherapy alone. The rates of Grade 2 and 3 genitourinary toxicity were 1.0% and 1.7%, respectively. Excellent local control was achieved at our hospital for localized prostate cancer with 125I brachytherapy with and without EBRT. Gastrointestinal and genitourinary toxicities were acceptable.

Y Kanda (2012)
Although there are many commercially available statistical software packages, only a few implement a competing risk analysis or a proportional hazards regression model with time-dependent covariates, which are necessary in studies on hematopoietic SCT. In addition, most packages are not clinician friendly, as they require that commands be written based on statistical languages. This report describes the statistical software ‘EZR' (Easy R), which is based on R and R commander. EZR enables the application of statistical functions that are frequently used in clinical studies, such as survival analyses, including competing risk analyses and the use of time-dependent covariates, receiver operating characteristics analyses, meta-analyses, sample size calculation and so on, by point-and-click access. EZR is freely available on our website (http://www.jichi.ac.jp/saitama-sct/SaitamaHP.files/statmed.html) and runs on both Windows (Microsoft Corporation, USA) and Mac OS X (Apple, USA). This report provides instructions for the installation and operation of EZR.

Anthony D'Amico (1998)
Interstitial radiation (implant) therapy is used to treat clinically localized adenocarcinoma of the prostate, but how it compares with other treatments is not known. To estimate control of prostate-specific antigen (PSA) after radical prostatectomy (RP), external beam radiation (RT), or implant with or without neoadjuvant androgen deprivation therapy in patients with clinically localized prostate cancer. Retrospective cohort study of outcome data compared using Cox regression multivariable analyses. A total of 1872 men treated between January 1989 and October 1997 with an RP (n = 888) or implant with or without neoadjuvant androgen deprivation therapy (n = 218) at the Hospital of the University of Pennsylvania, Philadelphia, or RT (n = 766) at the Joint Center for Radiation Therapy, Boston, Mass, were enrolled. Actuarial freedom from PSA failure (defined as PSA outcome). The relative risk (RR) of PSA failure in low-risk patients (stage T1c, T2a and PSA level 10 and 20 ng/mL or Gleason score > or =8) treated with implant compared with RP were 3.1 (95% CI, 1.5-6.1) and 3.0 (95% CI, 1.8-5.0), respectively. The addition of androgen deprivation to implant therapy did not improve PSA outcome in high-risk patients but resulted in a PSA outcome that was not statistically different compared with the results obtained using RP or RT in intermediate-risk patients. These results were unchanged when patients were stratified using the traditional rankings of biopsy Gleason scores of 2 through 4 vs 5 through 6 vs 7 vs 8 through 10. Low-risk patients had estimates of 5-year PSA outcome after treatment with RP, RT, or implant with or without neoadjuvant androgen deprivation that were not statistically different, whereas intermediate- and high-risk patients treated with RP or RT did better then those treated by implant. Prospective randomized trials are needed to verify these findings.