CTLA-4 and PD-1 Pathways : Similarities, Differences, and Implications of Their Inhibition 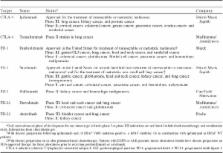 The cytotoxic T-lymphocyte–associated antigen 4 (CTLA-4) and programmed death 1 (PD-1) immune checkpoints are negative regulators of T-cell immune function. Inhibition of these targets, resulting in increased activation of the immune system, has led to new immunotherapies for melanoma, non–small cell lung cancer, and other cancers. Ipilimumab, an inhibitor of CTLA-4, is approved for the treatment of advanced or unresectable melanoma. Nivolumab and pembrolizumab, both PD-1 inhibitors, are approved to treat patients with advanced or metastatic melanoma and patients with metastatic, refractory non-small cell lung cancer. In addition the combination of ipilimumab and nivolumab has been approved in patients with BRAF WT metastatic or unresectable melanoma. The roles of CTLA-4 and PD-1 in inhibiting immune responses, including antitumor responses, are largely distinct. CTLA-4 is thought to regulate T-cell proliferation early in an immune response, primarily in lymph nodes, whereas PD-1 suppresses T cells later in an immune response, primarily in peripheral tissues. The clinical profiles of immuno-oncology agents inhibiting these 2 checkpoints may vary based on their mechanistic differences. This article provides an overview of the CTLA-4 and PD-1 pathways and implications of their inhibition in cancer therapy.

Hideo Yagita,  Michael Curran,  P. Allison … (2010)
Vaccination with irradiated B16 melanoma cells expressing either GM-CSF (Gvax) or Flt3-ligand (Fvax) combined with antibody blockade of the negative T-cell costimulatory receptor cytotoxic T-lymphocyte antigen-4 (CTLA-4) promotes rejection of preimplanted tumors. Despite CTLA-4 blockade, T-cell proliferation and cytokine production can be inhibited by the interaction of programmed death-1 (PD-1) with its ligands PD-L1 and PD-L2 or by the interaction of PD-L1 with B7-1. Here, we show that the combination of CTLA-4 and PD-1 blockade is more than twice as effective as either alone in promoting the rejection of B16 melanomas in conjunction with Fvax. Adding alphaPD-L1 to this regimen results in rejection of 65% of preimplanted tumors vs. 10% with CTLA-4 blockade alone. Combination PD-1 and CTLA-4 blockade increases effector T-cell (Teff) infiltration, resulting in highly advantageous Teff-to-regulatory T-cell ratios with the tumor. The fraction of tumor-infiltrating Teffs expressing CTLA-4 and PD-1 increases, reflecting the proliferation and accumulation of cells that would otherwise be anergized. Combination blockade also synergistically increases Teff-to-myeloid-derived suppressor cell ratios within B16 melanomas. IFN-gamma production increases in both the tumor and vaccine draining lymph nodes, as does the frequency of IFN-gamma/TNF-alpha double-producing CD8(+) T cells within the tumor. These results suggest that combination blockade of the PD-1/PD-L1- and CTLA-4-negative costimulatory pathways allows tumor-specific T cells that would otherwise be inactivated to continue to expand and carry out effector functions, thereby shifting the tumor microenvironment from suppressive to inflammatory.

Steven D. Leach,  L. J. Allison,  Eva Krümmel (1996)
One reason for the poor immunogenicity of many tumors may be that they cannot provide signals for CD28-mediated costimulation necessary to fully activate T cells. It has recently become apparent that CTLA-4, a second counterreceptor for the B7 family of costimulatory molecules, is a negative regulator of T cell activation. Here, in vivo administration of antibodies to CTLA-4 resulted in the rejection of tumors, including preestablished tumors. Furthermore, this rejection resulted in immunity to a secondary exposure to tumor cells. These results suggest that blockade of the inhibitory effects of CTLA-4 can allow for, and potentiate, effective immune responses against tumor cells.

Control of peripheral T-cell tolerance and autoimmunity via the CTLA-4 and PD-1 pathways.

Brian T. Fife,  Jeffrey Bluestone (2008)
Classically, the CD28/cytotoxic T-lymphocyte antigen-4 (CTLA-4) and B7 families of cell surface molecules regulate complex signaling pathways that profoundly affect T-cell responses. The recent identification and characterization of additional CD28 and B7 family members including programmed death-1 (PD-1), programmed death ligand-1 (PD-L1) (B7-H1), and PD-L2 (B7-DC) has added to the complexity and greater appreciation of how surface molecules control T-cell activation and peripheral tolerance. CD28/B7 interactions mediate co-stimulation and significantly enhance peripheral T-cell responses. CTLA-4, in contrast, interacting with the same B7 molecules, results in decreased T-lymphocyte activity and regulates the immune response. Similarly, PD-1 interactions with PD-L1 and PD-L2 downmodulate T-cell immune responses. Despite these similarities, the regulatory roles of the CTLA-4 and PD-1 pathways are distinct. This may be due, at least in part, to the differential expression patterns of the CTLA-4 and PD-1 ligands both temporally and spatially. This article examines the role of CTLA-4 and PD-1 in limiting autoreactivity and establishing peripheral self-tolerance with the hypothesis that CTLA-4 signals are required early in the lymph node during initiation of an immune response and PD-1 pathways act late at the tissue sites to limit T-cell activity.

This is an open-access article distributed under the terms of the Creative Commons Attribution-Non Commercial-No Derivatives License 4.0 (CCBY-NC-ND), where it is permissible to download and share the work provided it is properly cited. The work cannot be changed in any way or used commercially. http://creativecommons.org/licenses/by-nc-nd/4.0.