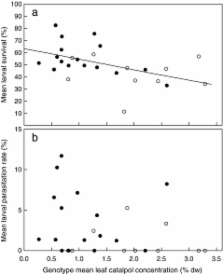 The ability to cope with plant defense chemicals differs between specialist and generalist species. In this study, we examined the effects of the concentration of the two main iridoid glycosides (IGs) in Plantago lanceolata, aucubin and catalpol, on the performance of a specialist and two generalist herbivores and their respective endoparasitoids. Development of the specialist herbivore Melitaea cinxia was unaffected by the total leaf IG concentration in its host plant. By contrast, the generalist herbivores Spodoptera exigua and Chrysodeixis chalcites showed delayed larval and pupal development on plant genotypes with high leaf IG concentrations, respectively. This result is in line with the idea that specialist herbivores are better adapted to allelochemicals in host plants on which they are specialized. Melitaea cinxia experienced less post-diapause larval and pupal mortality on its local Finnish P. lanceolata than on Dutch genotypes. This could not be explained by differences in IG profiles, suggesting that M. cinxia has adapted in response to attributes of its local host plants other than to IG chemistry. Development of the specialist parasitoid Cotesia melitaearum was unaffected by IG variation in the diet of its host M. cinxia, a response that was concordant with that of its host. By contrast, the development time responses of the generalist parasitoids Hyposoter didymator and Cotesia marginiventris differed from those of their generalist hosts, S. exigua and C. chalcites. While their hosts developed slowly on high-IG genotypes, development time of H. didymator was unaffected. Cotesia marginiventris actually developed faster on hosts fed high-IG genotypes, although they then had short adult longevity. The faster development of C. marginiventris on hosts that ate high-IG genotypes is in line with the “immunocompromized host” hypothesis, emphasizing the potential negative effects of toxic allelochemicals on the host’s immune response.

Butterflies and Plants: A Study in Coevolution

The raison d'ĕtre of secondary plant substances; these odd chemicals arose as a means of protecting plants from insects and now guide insects to food.

Ruben A Kraaijeveld,  H. Godfray (1997)
The extent to which an organism is selected to invest in defences against pathogens and parasites depends on the advantages that ensue should infection occur, but also on the costs of maintaining defences in the absence of infection. The presence of heritable variation in resistance suggests that costs exist, but we know very little about the nature or magnitude of these costs in natural populations of animals. A powerful technique for identifying trade-offs between fitness components is the study of correlated responses to artificial selection. We have selected Drosophila melanogaster for improved resistance against an endoparasitoid, Asobara tabida. Endoparasitoids are insects whose larvae develop internally within the body of other insects, eventually killing them, although their hosts can sometimes survive attack by mounting a cellular immune response. We found that reduced larval competitive ability in unparasitized D. melanogaster is a correlated response to artificial selection for improved resistance against A. tabida. The strength of selection for competitive ability and parasitoid resistance is likely to vary temporally and spatially, which may explain the observed heritable variation in resistance.