Implications of Aquaglyceroporin 7 in Energy Metabolism 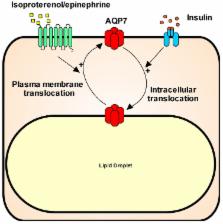 The aquaglyceroporin AQP7 is a pore-forming transmembrane protein that facilitates the transport of glycerol across cell membranes. Glycerol is utilized both in carbohydrate and lipid metabolism. It is primarily stored in white adipose tissue as part of the triglyceride molecules. During states with increased lipolysis, such as fasting and diabetes, glycerol is released from adipose tissue and metabolized in other tissues. AQP7 is expressed in adipose tissue where it facilitates the efflux of glycerol, and AQP7 deficiency has been linked to increased glycerol kinase activity and triglyceride accumulation in adipose tissue, leading to obesity and secondary development of insulin resistance. However, AQP7 is also expressed in a wide range of other tissues, including kidney, muscle, pancreatic β-cells and liver, where AQP7 also holds the potential to influence whole body energy metabolism. The aim of the review is to summarize the current knowledge on AQP7 in adipose tissue, as well as AQP7 expressed in other tissues where AQP7 might play a significant role in modulating whole body energy metabolism.

The Organization, Promoter Analysis, and Expression of the Human PPARγ Gene

Mitochondrial energy metabolism in heart failure: a question of balance.

M Huss,  John Kelly (2005)
The mitochondrion serves a critical role as a platform for energy transduction, signaling, and cell death pathways relevant to common diseases of the myocardium such as heart failure. This review focuses on the molecular regulatory events and downstream effector pathways involved in mitochondrial energy metabolic derangements known to occur during the development of heart failure.

A current view of the mammalian aquaglyceroporins.

Tanis R Fenton,  Jørgen Frøkiær,  Jeppe Praetorius … (2007)
The discovery of aquaporin water channels by Agre and coworkers answered a long-standing biophysical question of how the majority of water crosses biological membranes. The identification and study of aquaporins have provided insight, at the molecular level, into the fundamental physiology of water balance regulation and the pathophysiology of water balance disorders. In addition to the originally identified classical aquaporins, a second class of aquaporins has been identified. Aquaporins in this latter class, the so-called aquaglyceroporins, transport small uncharged molecules such as glycerol and urea as well as water. Aquaglyceroporins have a wide tissue distribution, and emerging data suggest that several of them may play previously unappreciated physiological or pathophysiological roles. Analyses of transgenic mice have revealed potential roles of aquaglyceroporins in skin elasticity, gastrointestinal function and metabolism, and metabolic diseases such as diabetes mellitus. This review comprehensively discusses the recent discoveries in the field of aquaglyceroporins, alongside a brief overview of the so-called unorthodox aquaporins.