Effect of progesterone administration on the prognosis of patients with severe traumatic brain injury: a meta-analysis of randomized clinical trials 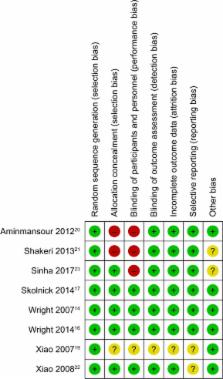 The aim of this study was to assess the neuroprotective effect of progesterone administration on severe traumatic brain injury (TBI) for different follow-up periods and administration route by completing a meta-analysis of randomized clinical trials (RCTs).

A systematic literature search of PubMed, Embase, and Cochrane databases and the Web of Science (from establishment of each to September 1, 2018) was performed to identify original RCTs that evaluated the associations between progesterone treatment and the prognosis of patients with severe TBI.

Progesterone administration improved the clinical outcomes of severe TBI patients within 3 months but may not have significant long-term benefits 6 months post-injury.

Sanjay Gupta,  B. L. Clark,  Leslie B Gordon … (2007)
Laboratory evidence indicates that progesterone has potent neuroprotective effects. We conducted a pilot clinical trial to assess the safety and potential benefit of administering progesterone to patients with acute traumatic brain injury. This phase II, randomized, double-blind, placebo-controlled trial was conducted at an urban Level I trauma center. One hundred adult trauma patients who arrived within 11 hours of injury with a postresuscitation Glasgow Coma Scale score of 4 to 12 were enrolled with proxy consent. Subjects were randomized on a 4:1 basis to receive either intravenous progesterone or placebo. Blinded observers assessed patients daily for the occurrence of adverse events and signs of recovery. Neurologic outcome was assessed 30 days postinjury. The primary safety measures were differences in adverse event rates and 30-day mortality. The primary measure of benefit was the dichotomized Glasgow Outcome Scale-Extended 30 days postinjury. Seventy-seven patients received progesterone; 23 received placebo. The groups had similar demographic and clinical characteristics. Laboratory and physiologic characteristics were similar at enrollment and throughout treatment. No serious adverse events were attributed to progesterone. Adverse and serious adverse event rates were similar in both groups, except that patients randomized to progesterone had a lower 30-day mortality rate than controls (rate ratio 0.43; 95% confidence interval 0.18 to 0.99). Thirty days postinjury, the majority of severe traumatic brain injury survivors in both groups had relatively poor Glasgow Outcome Scale-Extended and Disability Rating Scale scores. However, moderate traumatic brain injury survivors who received progesterone were more likely to have a moderate to good outcome than those randomized to placebo. In this small study, progesterone caused no discernible harm and showed possible signs of benefit.

A clinical trial of progesterone for severe traumatic brain injury.

Improved outcomes from the administration of progesterone for patients with acute severe traumatic brain injury: a randomized controlled trial

Guomin Xiao,  Jing Wei,  Weiqi Yan … (2008)
Background Severe traumatic brain injury (TBI) has been increasing with greater incidence of injuries from traffic or sporting accidents. Although there are a number of animal models of TBI using progesterone for head injury, the effects of progesterone on neurologic outcome of acute TBI patients remain unclear. The aim of the present clinical study was to assess the longer-term efficacy of progesterone on the improvement in neurologic outcome of patients with acute severe TBI. Methods A total of 159 patients who arrived within 8 hours of injury with a Glasgow Coma Score ≤ 8 were enrolled in the study. A prospective, randomized, placebo-controlled trial of progesterone was conducted in the Neurotrauma Center of our teaching hospital. The patients were randomized to receive either progesterone or placebo. The primary endpoint was the Glasgow Outcome Scale score 3 months after brain injury. Secondary efficacy endpoints included the modified Functional Independence Measure score and mortality. In a follow-up protocol at 6 months, the Glasgow Outcome Scale and the modified Functional Independence Measure scores were again determined. Results Of the 159 patients randomized, 82 received progesterone and 77 received placebo. The demographic characteristics, the mechanism of injury, and the time of treatment were compared for the two groups. After 3 months and 6 months of treatment, the dichotomized Glasgow Outcome Scale score analysis exhibited more favorable outcomes among the patients who were given progesterone compared with the control individuals (P = 0.034 and P = 0.048, respectively). The modified Functional Independence Measure scores in the progesterone group were higher than those in the placebo group at both 3-month and 6-month follow-up (P 0.05). Instances of complications and adverse events associated with the administration of progesterone were not found. Conclusion Our data suggest that acute severe TBI patients with administration of progesterone hold improved neurologic outcomes for up to 6 months. These results provide information important for further large and multicenter clinical trials on progesterone as a promising neuroprotective drug. Trial Registration ACTRN12607000545460.