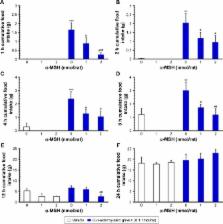 This study aimed to investigate the modulating effect of α-MSH on the central acyl ghrelin-induced food intake, gastrointestinal motility, and colonic secretion in rats.

We examined the effects of α-MSH and acyl ghrelin on food intake, gastric emptying, small intestinal transit, colonic motility, and secretion in conscious rats with a chronic implant of ICV catheters.

Antagonism of central melanocortin receptors in vitro and in vivo by agouti-related protein.

Mandy L. Wilson,  M Ollmann,  Gregory Barsh … (1997)
Expression of Agouti protein is normally limited to the skin where it affects pigmentation, but ubiquitous expression causes obesity. An expressed sequence tag was identified that encodes Agouti-related protein, whose RNA is normally expressed in the hypothalamus and whose levels were increased eightfold in ob/ob mice. Recombinant Agouti-related protein was a potent, selective antagonist of Mc3r and Mc4r, melanocortin receptor subtypes implicated in weight regulation. Ubiquitous expression of human AGRP complementary DNA in transgenic mice caused obesity without altering pigmentation. Thus, Agouti-related protein is a neuropeptide implicated in the normal control of body weight downstream of leptin signaling.

Ghrelin is an appetite-stimulatory signal from stomach with structural resemblance to motilin.

H Yuzuriha,  Akio Inui,  M. Kasuga … (2001)
: Ghrelin, an endogenous ligand for growth hormone secretagogue receptor, was recently identified in the rat stomach. We examined the effects of the gastric peptide ghrelin on energy balance in association with leptin and vagal nerve activity. : Food intake, oxygen consumption, gastric emptying, and hypothalamic neuropeptide Y (NPY) messenger RNA expression were measured after intra-third cerebroventricular or intraperitoneal injections of ghrelin in mice. The gastric vagal nerve activity was recorded after intravenous administration in rats. Gastric ghrelin gene expression was assessed by Northern blot analysis. Repeated coadministration of ghrelin and interleukin (IL)-1 beta was continued for 5 days. : Ghrelin exhibited gastroprokinetic activity with structural resemblance to motilin and potent orexigenic activity through action on the hypothalamic neuropeptide Y (NPY) and Y(1) receptor, which was lost after vagotomy. Ghrelin decreased gastric vagal afferent discharge in contrast to other anorexigenic peptides that increased the activity. Ghrelin gene expression in the stomach was increased by fasting and in ob/ob mice, and was decreased by administration of leptin and IL-1 beta. Peripherally administered ghrelin blocked IL-1 beta-induced anorexia and produced positive energy balance by promoting food intake and decreasing energy expenditure. : Ghrelin, which is negatively regulated by leptin and IL-1 beta, is secreted by the stomach and increases arcuate NPY expression, which in turn acts through Y(1) receptors to increase food intake and decrease energy expenditure. Gastric peptide ghrelin may thus function as part of the orexigenic pathway downstream from leptin and is a potential therapeutic target not only for obesity but also for anorexia and cachexia.

Gianluca Baldanzi,  Nicoletta Filigheddu,  Santina Cutrupi … (2003)
Ghrelin is an acyl-peptide gastric hormone acting on the pituitary and hypothalamus to stimulate growth hormone (GH) release, adiposity, and appetite. Ghrelin endocrine activities are entirely dependent on its acylation and are mediated by GH secretagogue (GHS) receptor (GHSR)-1a, a G protein–coupled receptor mostly expressed in the pituitary and hypothalamus, previously identified as the receptor for a group of synthetic molecules featuring GH secretagogue (GHS) activity. Des-acyl ghrelin, which is far more abundant than ghrelin, does not bind GHSR-1a, is devoid of any endocrine activity, and its function is currently unknown. Ghrelin, which is expressed in heart, albeit at a much lower level than in the stomach, also exerts a cardio protective effect through an unknown mechanism, independent of GH release. Here we show that both ghrelin and des-acyl ghrelin inhibit apoptosis of primary adult and H9c2 cardiomyocytes and endothelial cells in vitro through activation of extracellular signal–regulated kinase-1/2 and Akt serine kinases. In addition, ghrelin and des-acyl ghrelin recognize common high affinity binding sites on H9c2 cardiomyocytes, which do not express GHSR-1a. Finally, both MK-0677 and hexarelin, a nonpeptidyl and a peptidyl synthetic GHS, respectively, recognize the common ghrelin and des-acyl ghrelin binding sites, inhibit cell death, and activate MAPK and Akt. These findings provide the first evidence that, independent of its acylation, ghrelin gene product may act as a survival factor directly on the cardiovascular system through binding to a novel, yet to be identified receptor, which is distinct from GHSR-1a.