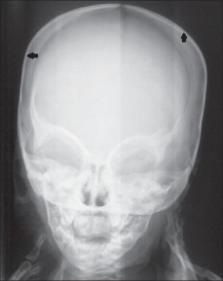 Kenny-Caffey syndrome type 1 is a rare hereditary skeletal disorder. We present here a documented case of a 7-month-old girl with the characteristic symptoms of growth retardation, dysmorphic features, and hypoparathyroidism.

Andrew R. C. Milner, N Sakati, S. Sanjad … (1991)
Twelve infants (six boys, six girls) with severe hypocalcaemic tetany or convulsions were seen over a three year period. Nine patients were symptomatic in the newborn period. Their hypocalcaemia was associated with hyperphosphataemia and very low concentrations of immunoreactive parathyroid hormone. None of the babies suffered from congenital cardiac disease. Cell mediated immunity, measured in five patients, was normal. There were no chromosomal abnormalities but all patients shared several dysmorphic features including deep set eyes, microcephaly, thin lips, beaked nose tip, external ear anomalies, micrognathia, and depressed nasal bridge. Mental retardation of varying degree was found in all patients. All had severe intrauterine and postnatal growth retardation. Four patients have died. The remaining eight patients are on treatments with vitamin D and calcium supplements with no change in their growth pattern. We believe that this association of congenital hypoparathyroidism with severe growth failure and dysmorphism represents a new syndrome.

Sanjad-Sakati syndrome/Kenny-Caffey syndrome type 1: a study of 21 cases in Kuwait.

K K Naguib, S Gouda, A Elshafey … (2015)
We studied 21 patients with Sanjad-Sakati syndrome (SSS) from 16 families. Parental consanguinity was recorded in 2 families (12.5%). All patients had severe intrauterine growth retardation, short stature, small hands and feet, blue sclera, deep-set eyes, microcephaly, persistent hypocalcaemia and hypoparathyroidism. Medullary stenosis was detected in 2 patients. Cytogenetic and fluorescent in situ hybridization studies were normal. All affected persons had homozygous deletion of 12 bp (155-166del) in exon 3 of the TBCE gene. All of the parents were heterozygous carriers of this mutation. The high frequency of SSS and low frequency of consanguineous marriages in this study may reflect a high rate of heterozygous carriers.