Characterization and function of the human macrophage dopaminergic system: implications for CNS disease and drug abuse 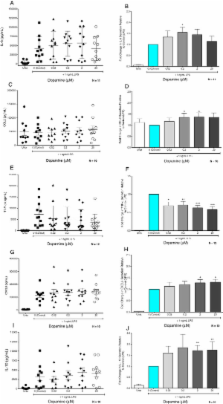 Perivascular macrophages and microglia are critical to CNS function. Drugs of abuse increase extracellular dopamine in the CNS, exposing these cells to elevated levels of dopamine. In rodent macrophages and human T-cells, dopamine was shown to modulate cellular functions through activation of dopamine receptors and other dopaminergic proteins. The expression of these proteins and the effects of dopamine on human macrophage functions had not been studied.

To study dopaminergic gene expression, qRT-PCR was performed on mRNA from primary human monocyte derived macrophages (MDM). Expression and localization of dopaminergic proteins was examined by immunoblotting isolated plasma membrane, total membrane and cytosolic proteins from MDM. To characterize dopamine-mediated changes in cytokine production in basal and inflammatory conditions, macrophages were treated with different concentrations of dopamine in the presence or absence of LPS and cytokine production was assayed by ELISA. Statistical significance was determined using two-tailed Students’ T-tests or Wilcoxen Signed Rank tests.

Dopamine receptors: from structure to function.

Margaret S. Robinson,  C Missale,  Robert Nash … (1997)
The diverse physiological actions of dopamine are mediated by at least five distinct G protein-coupled receptor subtypes. Two D1-like receptor subtypes (D1 and D5) couple to the G protein Gs and activate adenylyl cyclase. The other receptor subtypes belong to the D2-like subfamily (D2, D3, and D4) and are prototypic of G protein-coupled receptors that inhibit adenylyl cyclase and activate K+ channels. The genes for the D1 and D5 receptors are intronless, but pseudogenes of the D5 exist. The D2 and D3 receptors vary in certain tissues and species as a result of alternative splicing, and the human D4 receptor gene exhibits extensive polymorphic variation. In the central nervous system, dopamine receptors are widely expressed because they are involved in the control of locomotion, cognition, emotion, and affect as well as neuroendocrine secretion. In the periphery, dopamine receptors are present more prominently in kidney, vasculature, and pituitary, where they affect mainly sodium homeostasis, vascular tone, and hormone secretion. Numerous genetic linkage analysis studies have failed so far to reveal unequivocal evidence for the involvement of one of these receptors in the etiology of various central nervous system disorders. However, targeted deletion of several of these dopamine receptor genes in mice should provide valuable information about their physiological functions.

Regulation of innate immune responses in the brain.

Serge Rivest (2009)
Microglial cells are the main innate immune cells of the complex cellular structure of the brain. These cells respond quickly to pathogens and injury, accumulate in regions of degeneration and produce a wide variety of pro-inflammatory molecules. These observations have resulted in active debate regarding the exact role of microglial cells in the brain and whether they have beneficial or detrimental functions. Careful targeting of these cells could have therapeutic benefits for several types of trauma and disease specific to the central nervous system. This Review discusses the molecular details underlying the innate immune response in the brain during infection, injury and disease.

Jason Brenchley (2006)
Chronic activation of the immune system is a hallmark of progressive HIV infection and better predicts disease outcome than plasma viral load, yet its etiology remains obscure. Here, we show that circulating microbial products, likely derived from the gastrointestinal tract, are a primary cause of HIV-related systemic immune activation. Circulating lipopolysaccharide, an indicator of microbial translocation, is significantly increased in chronically HIV-infected individuals and SIV-infected rhesus macaques. We show that monocytes are chronically stimulated in vivo by increased lipopolysaccharide, which also correlates with measures of innate and adaptive immune activation. Effective antiretroviral therapy appears to reduce microbial translocation. Furthermore, in non-pathogenic SIV infection of sooty mangabeys, microbial translocation does not seem to occur. These data establish a mechanism for chronic immune activation in the context of a compromised gastrointestinal mucosal surface and provide novel directions for therapeutic interventions that modify the consequences of acute HIV infection.