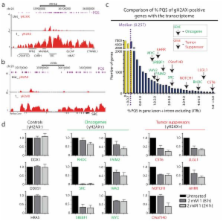 Guanine-rich DNA sequences that can adopt non-Watson-Crick structures in vitro are prevalent in the human genome. Whether such structures normally exist in mammalian cells has, however, been the subject of active research for decades. Here, we show that the G-quadruplex interacting drug pyridostatin promoted growth arrest in human cancer cells via inducing replication- and transcription-dependent DNA damage. Chromatin immunoprecipitation sequence (ChIP-Seq) analysis of the DNA damage marker γH2AX provided the genome-wide distribution of pyridostatin-induced sites of damage, and revealed that pyridostatin targets gene bodies containing clusters of sequences with a propensity for G-quadruplex formation. As a result, pyridostatin modulated the expression of these genes, including the proto-oncogene SRC. We observed that pyridostatin reduced SRC protein levels and SRC-dependent cellular motility in human breast cancer cells, validating SRC as a target. Our unbiased approach to define genomic sites of action for a drug establishes a framework for discovering functional DNA-drug interactions.

A renaissance for SRC.

Niraj Shanbhag,  Ilona U. Rafalska-Metcalf,  Carlo Balane-Bolivar … (2010)
DNA double-strand breaks (DSBs) initiate extensive local and global alterations in chromatin structure, many of which depend on the ATM kinase. Histone H2A ubiquitylation (uH2A) on chromatin surrounding DSBs is one example, thought to be important for recruitment of repair proteins. uH2A is also implicated in transcriptional repression; an intriguing yet untested hypothesis is that this function is conserved in the context of DSBs. Using a novel reporter that allows for visualization of repair protein recruitment and local transcription in single cells, we describe an ATM-dependent transcriptional silencing program in cis to DSBs. ATM prevents RNA polymerase II elongation-dependent chromatin decondensation at regions distal to DSBs. Silencing is partially dependent on E3 ubiquitin ligases RNF8 and RNF168, whereas reversal of silencing relies on the uH2A deubiquitylating enzyme USP16. These findings give insight into the role of posttranslational modifications in mediating crosstalk between diverse processes occurring on chromatin. Copyright 2010 Elsevier Inc. All rights reserved.

John A Capra,  Virginia Zakian,  Katrin Paeschke (2011)
G-quadruplex (G4) DNA structures are extremely stable four-stranded secondary structures held together by noncanonical G-G base pairs. Genome-wide chromatin immunoprecipitation was used to determine the in vivo binding sites of the multifunctional Saccharomyces cerevisiae Pif1 DNA helicase, a potent unwinder of G4 structures in vitro. G4 motifs were a significant subset of the high-confidence Pif1-binding sites. Replication slowed in the vicinity of these motifs, and they were prone to breakage in Pif1-deficient cells, whereas non-G4 Pif1-binding sites did not show this behavior. Introducing many copies of G4 motifs caused slow growth in replication-stressed Pif1-deficient cells, which was relieved by spontaneous mutations that eliminated their ability to form G4 structures, bind Pif1, slow DNA replication, and stimulate DNA breakage. These data suggest that G4 structures form in vivo and that they are resolved by Pif1 to prevent replication fork stalling and DNA breakage. Copyright © 2011 Elsevier Inc. All rights reserved.