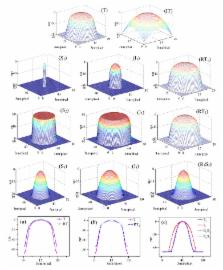 Precision measurements of a nanoscale sample surface using an atomic force microscope (AFM) require a precise quantitative knowledge of the 3D tip shape. Blind tip reconstruction (BTR), established by Villarrubia, gives an outer bound with larger errors if the tip characterizer is not appropriate. In order to explore the errors of BTR, a series of simulation experiments based on a conical model were carried out. The results show that, to reconstruct the tip precisely, the cone angle of the tip characterizer must be smaller than that of the tip. Furthermore, the errors decrease as a function of the tip cone angle and increase linearly with the sample radius of curvature, irrespective of the tip radius of curvature. In particular, for sharp (20 nm radius) and blunt (80 nm radius) tips, the radius of curvature of the tip characterizer must be smaller than 5 nm. Based on these simulation results, a local error model of BTR was established. The maximum deviation between the errors derived from the model and the simulated experiments is 1.22 nm. Compared with the lateral resolution used in the above simulated experiments (4 nm/pixel), it is valid to ignore the deviations and consider the local error model of BTR is indeed in quantitative agreement with the simulation results. Finally, two simulated ideal structures are proposed here, together with their corresponding real samples. The simulation results show they are suitable for BTR.

Ashley D Slattery,  Lorraine Gibson,  Maria S. Quinton … (2013)
Considerable attention has been given to the calibration of AFM cantilever spring constants in the last 20 years. Techniques that do not require tip-sample contact are considered advantageous since the imaging tip is not at risk of being damaged. Far less attention has been directed toward measuring the cantilever deflection or sensitivity, despite the fact that the primary means of determining this factor relies on the AFM tip being pressed against a hard surface, such as silicon or sapphire; which has the potential to significantly damage the tip. A recent method developed by Tourek et al. in 2010 involves deflecting the AFM cantilever a known distance from the imaging tip by pressing the cantilever against a sharpened tungsten wire. In this work a similar yet more precise method is described, whereby the deflection of the cantilever is achieved using an AFM probe with a spring constant much larger than the test cantilever, essentially a rigid cantilever. The exact position of loading on the test cantilever was determined by reverse AFM imaging small spatial markers that are milled into the test cantilever using a focussed ion beam. For V shaped cantilevers it is possible to reverse image the arm intersection in order to determine the exact loading point without necessarily requiring FIB milled spatial markers, albeit at the potential cost of additional uncertainty. The technique is applied to tip-less, beam shaped and V shaped cantilevers and compared to the hard surface contact technique with very good agreement (on average less than 5% difference). While the agreement with the hard surface contact technique was very good the error on the technique is dependent upon the assumptions inherent in the method, such as cantilever shape, loading point distance and ratio of test to rigid cantilever spring constants. The average error ranged between 2 to 5% for the majority of test cantilevers studied. The sensitivity derived with this technique can then be used to calibrate the cantilever spring constant using the thermal noise method, allowing complete force calibration to be accurately performed without tip-sample contact. Copyright © 2013 Elsevier B.V. All rights reserved.